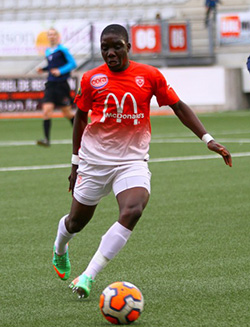 THREE foreign based players have been ruled out of the All-Africa Games qualifier against Cameroon on March 21 after their respective clubs refused to release them because the match falls outside the Fifa calendar for international matches.
Those out of blocked from travelling for the game include Kuda Mahachi who plays for Mamelodi Sundowns, Netherlands based Marvelous Nakamba and Colchester United midfielder Macaulley Bonne
The development has forced the Zimbabwe Under-23 coach Calisto Pasuwa to make changes to the team he had called up.
Again, the injury to first choice goalkeeper Bernard Donovan who plays for How Mine has also not help matters.
FC Platinum players Walter Musona, Wisdom Mutasa and Emmanuel Mandiranga have also been ruled out because their club is participating in the Caf Confederations Cup.
This has forced Pasuwa to call up a number of new faces including Dynamos’ Thomas Kadyaridzire formerly with Total Football Academy.
The coach has also called up Triangle’s utility player Praise Tonha, Munyaradzi Diro Nyenye (Harare City), Tinotenda Kadewera (Harare City), ZPC Kariba pair of Terrence Gonzo and Samuel Makawa.
Takudzwa Kutinyu of Chicken Inn has also received an invite.