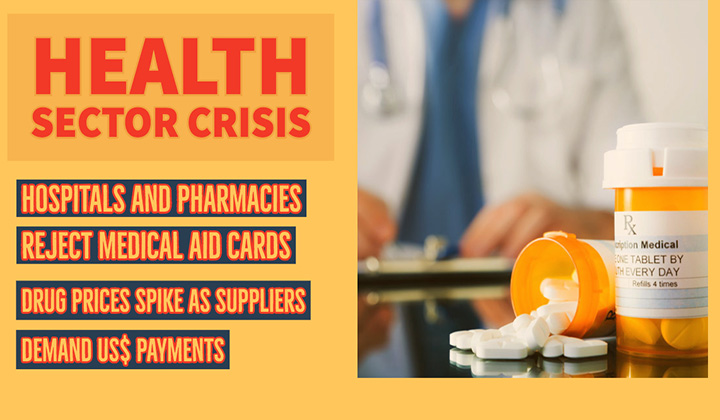 Zimbabwe has been in the throes of a cholera epidemic which claimed nearly 50 lives across the country with more than 7,000 cases reported in development blamed on lack of clean water supplies and broken sewer infrastructure.

A new storm has however, hit the health sector from another front as foreign currency shortages affect the supply of drugs.

New fiscal measures announced by Treasury last week – particularly a tax on electronic money transfers – has also led to a spike in the price of drugs.

The CEO of an upmarket private Harare hospital announced at the weekend that they were increasing the prices of drugs.

“(The hospital) wishes to advice that it has taken the difficult decision to temporarily adjust prices for drugs and sundries upwards, effective immediately,” the official said.

“We have noted that most of our critical suppliers have already started charging the US Dollars while some are not selling at all, which has presented a huge stock replenishment risk on our operations.”

He added; “We have made a temporary upward adjustment to stock prices across board and this is effective immediately, while we monitor the situation on the ground.

“The adjustment will add 15% points to our mark up and a cushion against further price increases by the time we replace stock, ” he said.

The Zimbabwe Association of Doctors for Human Rights (ZADHR) indicated Saturday that the country’s health sector is in a crises.

“The medical insurance cards were as of 05 October 2018 being rejected by most pharmacies whilst on the other hand basic antibiotics like azithromycin have gone up to $47 for a 3 day course.

“Most pharmacies are also running out of emergency medicines and situation in public hospitals is deteriorating by each day,” ZADHR said in a statement.

One of the country’s top pharmacy groups indicated that they were no longer taking medical aid cards for payment.

“We have temporarily suspended acceptance of Medical Aid due to the prevailing economic conditions,” the company said.

“Our suppliers need foreign currency and our pharmacy saw it unfit to go with the parallel market rates which will automatically exhaust our members benefits.”

The Pharmaceutical Society of Zimbabwe (PSZ) said the health system in the country has been paralysed by lack of foreign currency.

“We do have a crises in our hands in that we have critical drugs running out due to failure to fund the importation of raw materials and medicines.

“Our industry is 95% dependent on imports, as even for locally manufactured products we have to import the active pharmaceutical ingredients,” PSZ president Portifa Mwendera said.