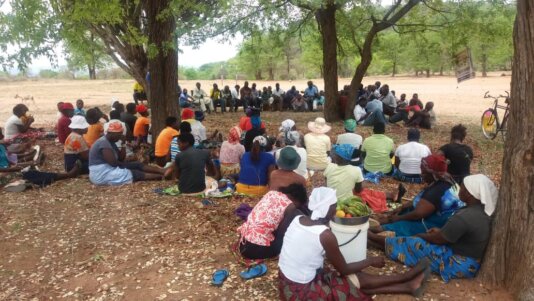 The curse of diamonds still trolls hundreds of families that were displaced from the Marange fields and resettled on Arda Transau, a desolate 12,000 hectare farm in Manicaland province.

Government identified the farm for resettlement more than a decade ago after allocating vast swathes of relocatees’ ancestral land to several diamond miners.

Swamped by crippling poverty and despair, some of them have already disposed of their houses as they trek back to Marange and other places, investigations have revealed.

The numbers of those that are retracing footsteps is still small, but a harbinger to a huge swell in the future, considering that there is near unanimity among residents that life at Arda Transau has become unbearable.

Close-to-the surface diamonds were discovered in the sprawling Marange fields around 2006, and thousands of illegal miners descended on the area, eking out the gems for sale to middlemen coming from as far afield as Antwerp in Belgium.

Three years later, a fierce security operation involving soldiers, the police and national intelligence cordoned off the diamond fields and granted mining licences to several investors, most of which entered into joint ventures with the government through the Zimbabwe Mining Development Corporation (ZMDC) and one with the army.

The mining areas became highly securitised, so families living close by had to move.

According to local pressure groups such as the now defunct Chiadzwa Community Development Trust, over 1 300 families were moved to Arda Transau between 2010 and 2011 to give the mining companies enough legroom.

And the Zimbabwe Consolidated Diamond Company (ZCDC), which took over from the former Marange diamond firms, only managed to relocate 20 families when, in late 2016,  the late former president Robert Mugabe kicked out most of the miners for multi-billion diamond leakages.

Each family was moved into a four-roomed match-box house, with a few exceptions where the houses were bigger.

They were given extra land for subsistence farming.

The relocation did not take into account the size of the family, which had an average of six members.

In one case that caused a big stir, 89-year-old Willard Kaiboni Kambeni was given a seven-roomed house to share with his 14 wives, 80 children and 20 grandchildren.

The relocatees received a blanket US$1 000 compensation each, with no valuations having taken place on the houses and other structures they had built over generations in Marange.

Just under 12 years after the relocations started, the people of Arda Transau cannot stand it anymore.

“People are disposing their houses and going back to Marange.

“Almost everyone is thinking of going back to Chiadzwa (the specific area in the diamond fields from which they were forced off),” said Donaldson Masvaure, who chairs the Arda Transau Relocation Development Trust (ATRDT).

The trust was formed in 2013 to represent the rights of the displaced people.

Investigations supported by Information for Development Trust (IDT) — a non-profit organisation promoting investigative journalism in Zimbabwe and Southern Africa — have revealed that, so far, more than 20 Arda Transau families have sold their homesteads at prices ranging from US$7 000 to US$10 000.

Numerous other families have since publicly or secretly placed their properties up for sale, while other residents of Arda Transau who were interviewed confessed that they were waiting to see how those that went out first would fare.

In the area relocated by Anjin, for instance, homeowners are advertising the sale of their houses on various platforms that include social media — such as the Facebook page named Mutare Houses, Plots and Stands for Sale — and public places where people gather physically.

An inquiry with the advertiser, one Sula, showed that the house was still on the market, though.

Anjin, it was discovered during a visit to Arda Transau, was the only company that had tarred roads and installed tap water within its settlement prior to the relocations.

The ATRDT treasurer, Chrispen Chirume, said during investigations that according to their records, at least 28 houses had been sold.

In the zone resettled by Anjin, 16 home-owners have already disposed of their houses, while the Jinan area has recorded eight sales, Marange Resources two and Mbada as well as DMC, one each.

“We have had enough of Arda. We are living miserable lives here and it’s better if government moves us back to Chiadzwa,” complained Ida, one of Kambeni’s 14 wives.

Masvaure said morale was at an all-time low in the “new settlement” as villagers grappled with false and broken promises at the hands of Anjin and other former miners.

“The only thing that Anjin did was to build these houses and this was before we came here.

“But not a single promise that was made has been fulfilled by the miner 10 years down the line,” Masvaure said.

Government has never made public the agreements it entered into with the diamond investors who were tasked with relocating the Marange people to Arda Transau.

However, investigations have revealed that there were two categories of obligations that the investors had to fulfil.

These were pre-relocation and corporate social responsibility obligations that the miners agreed to in an explicit memorandum of understanding.

The miners were supposed to build a thatched kitchen hut and an electrified three-bedroomed house on a one-hectare plot for each household.

The companies were to avail half a hectare of farmland supported by irrigation, provide food handouts of 200kg mealie meal, 20 litres cooking oil, 20kg sugar, 12 bars of soap, 20kg of beans, 20kg of kapenta fish and a carton of candles for every household in Arda after every quarter.

Furthermore, the villagers were to receive two 50kg of ammonium nitrate fertilizer, three 50kg of compound D fertilizer and 25kg of maize seed every planting season.

Each company was to build a clinic, primary and secondary school under its relocation area as well as provide uniforms, stationery and pay school fees for pupils in the first two years of settlement at Arda Transau.

The agreement further entailed that the companies were to prioritise Arda Transau relocatees when recruiting employees, as well as provide a shuttle bus to operate between Mutare and Arda Transau as a mechanism to alleviate transport costs for the displaced.

Over and above that, each household was to receive compensation based on the evaluation of their properties carried out before they left Marange.

Very little to nothing has been done to fulfil those obligations, though, as observations at the farm revealed.

Anjin Investments was the only company that managed to tar roads within its settlement, installed tap water and constructed the Arda Transau Clinic as well as the Chirasika Primary and Arda Secondary schools.

Mbada only spruced up an existing school, Wellington Primary School, at Arda.

“Yes, they built houses, schools and a clinic but this was before we were relocated. I’m yet to see anything positive that came after we were relocated. The only few changes that were done on the school came from ZCDC,” Masvaure said.

Anjin records indicated that the mining company donated a water purification plant and, temporarily, a shuttle bus for school-going children.

The irrigation scheme that it initiated never became operational; the centre pivots that were installed were vandalised before the beneficiaries could use them.

Though Anjin managed to tube the households under its jurisdiction, the company did not bring electricity to the houses.

“We were relocated on the basis of false promises.

“The majority, if not everything that we were promised were never attended to,” Elivert Gamunorwa, a former village head in Chiadzwa, said.

The 72-year-old father of 11 children said he had nine cattle and six goats when they moved to Arda Transau in 2010, but most of them died because of diseases and the lack of veterinary services at Arda.

He added that efforts to rehabilitate a dilapidated deep tank in the area fell short of resources.

She complained that the mining companies abandoned their obligation to employ locals from Arda, resulting in heightened poverty among the residents who were struggling to earn livelihoods from farming in the area of relocation.

Anjin Investments mysteriously returned to mine in Marange two years ago after having been booted out for allegedly looting diamonds during Mugabe’s time.

Government said the readmission was a public relations move to accommodate Chinese interests and strengthen relations with Zimbabwe.

Despite Anjin wresting the most lucrative portal from the government-owned ZCDC—a diamond claim that used to account for 70 percent of the latter’s annual gem production—the partly-Chinese company is not bringing any respite to the Arda residents.

It will not be an easy road back home for frustrated Arda relocatees, though.

They cannot go back to their original villages or anywhere near because those settlements are now designated for mining.

The few families that have returned so far have been absorbed on land owned by relatives and other villagers, who were spared the 2010-2011 displacements.

But the land is too limited to absorb the hundreds of families wishing to return.

The relocatees that spoke out at Arda said they would use the money realised from the sale of their properties on the farm to buy land in other areas and start life afresh.

A painful irony for those wishing to return is that villagers that remained in Marange are still bitter with and feel shortchanged by Anjin and the other former diamond miners.

“They destroyed schools, dams, and rivers but never built any replacements.

“They are now using our dams and river as slime dams, which they contaminate with dirt from their operations.

“They damaged our roads. They left the land with gullies where our cattle and livestock are falling into those open pits and gullies.

“And they don’t compensate. When we approach them and say we want these issues to be addressed, they take us as criminals,” said Newman Chiadzwa, a local businessman who was arrested in 2011 for protesting against Anjin expansion.

In an earlier interview before he left Anjin last year, Shingi Manyeruke, the company’s former acting general manager, claimed the diamond miner could not “adequately” fulfil its corporate social obligations because it was failing to break even after its return.

He insisted Anjin had invested more than any other company in Arda Transau — a claim that no-one at the settlement disputes.

It is just that the residents feel it was far from enough, and was not part of the corporate social responsibilities promises that the company signed for with the government.