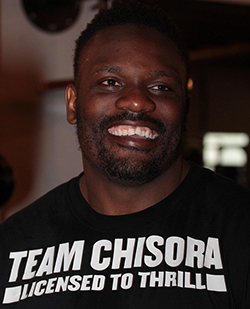 FORMER heavyweight boxing champion Dereck Chisora escaped a driving ban after successfully appealing a sentence for having no insurance.
Croydon Crown Court heard the former Commonwealth champion was left nearly£50,000 (US$62,000) out of pocket by the case.
Chisora, 33, was stopped by police in his £120,000 (US$150,000) black Bentley Continental Sport Supa in Hyde Park, central London, in November 2015, for driving without insurance or an MOT certificate, and was said to not have a valid driving licence.
He was given six points on his licence by Bromley Magistrates, meaning a six-month driving ban, but it was temporarily suspended while he appealed the conviction.
He appealed the sentence of six points, arguing special reasons and that he honestly believed he was insured at the time after entrusting a friend and employee to arrange the cover.
John Dye, representing Chisora, argued his client would not risk driving without insurance, especially such a valuable car in which he drove his young daughter.
The court heard when police checked with the insurance company, only one name appeared on the policy, which was Chisora’s brother in law, who also drove the fighter from time to time.
Asked why he believed he was insured, he said: “I remember paying for two drivers. Him and myself.”
The court heard the insurance was arranged and paid for by Chisora’s friend Johnson Boeteng, known as ‘Jay’.
The boxer said: “As an athlete he helps me with the admin and anything, and he was there to help with me buy the car.
“I get Jay to deal with my admin. And he dealt with the insurance. I pay him as an employee but I don’t see it like that.”

Asked why he believed he had insurance, he said: “Because the money went out of my bank account.
“When I paid for it I paid for two drivers, the money went out and I figured I was insured. I thought I was fine.”
The court was told on the day he was pulled over Chisora managed to get insurance on the car on the roadside with the police but his vehicle was still impounded by officers.
The car was leased, and under the terms of the agreement Chisora had to pay the full value of the vehicle to the finance company.Advertisement

He said: “I was very upset because I didn’t have my car for six months and I had to pay the full amount for my car. I had to pay £120,000.”
He told the court that shortly after he got it back he had to sell the car, getting £72,000 for it.
When questioned by prosecutor Kaj Scarsbrook he admitted it was his responsibility as the driver to check the insurance, but he put his faith in someone else he trusted to deal with paper work.
He revealed to the court he found reading documents “very hard”, due to being educated in Zimbabwe until his teens, before he moved to the UK.
He said he gets lawyers to deal with sports contracts and gets Jay and others he trusts to do other paperwork.
The court also heard from Boetang who said as far as he understood he had insured Chisora and his brother in law on the car.
However, he could not remember if he saw any sort of confirmation email or letter from the insurance company.
The appeal panel chair Recorder Marios Lambis, agreed with the appeal and ordered no points should put on the boxer’s Zimbabwean driving licence.
Recorder Lambis said: “In response to Mr Chisora’s evidence we were impressed by his calmness, his demeanour and his truthfulness and that there are special reasons to appeal this case.”
He said that he had the honest belief he was insured and “there were reasonable grounds for that belief” and the panel recognised the high financial the defendant had experienced from the case.
The judge said: “From all that, we don’t feel it would be appropriate or proportionate for any points to be awarded. Therefore, no points are necessary.”