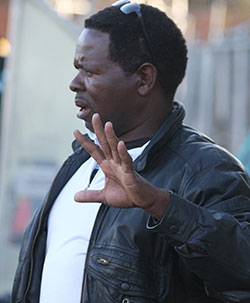 FORMER Caps United coach Gishon Ntini has died.
He was 42.
Ntini passed on at Karanda hospital on Sunday night following a short illness. He is survived by his wife Magret Jemsta and three children – two girls and one boy.
According to his wife Magret, Ntini will be buried on Tuesday at his rural home in Mhondoro Ngezi.
At the time of his death Ntini was coaching in Botswana, taking charge of Satmos which has since been relegated from the Premier League.
Ntini took charge of the team when it was already languishing in the relegation zone in the middle of February this year after a spell with Chiredzi FC in Zimbabwe.
Ntini, who called himself the Lion of Zimbabwean football, was an understudy to former Caps United coach Charles Mhlauri and later coached Caps United.
He also coached Shooting Stars before he went to Chiredzi where he guided Triangle to the Premiership in 2012.
He also had a spell as coach of relegated Chiredzi FC.Advertisement