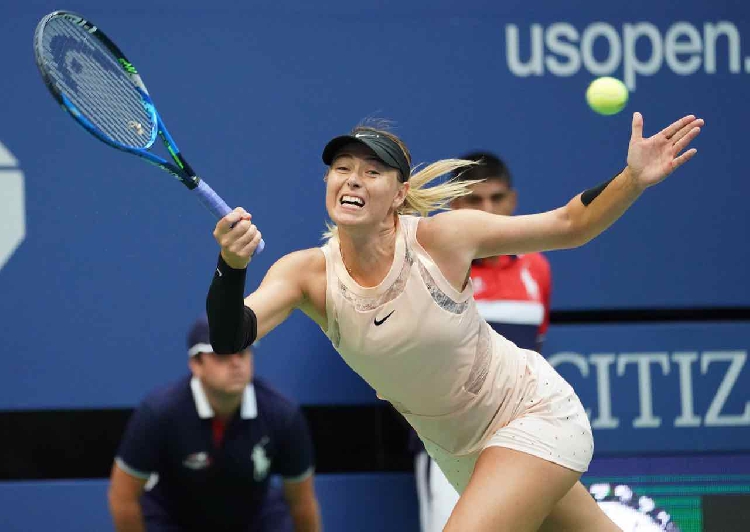 Maria Sharapova suffered her first opening round Wimbledon defeat and earliest Grand Slam exit in eight years on Tuesday when she was shocked by fellow Russian Vitalia Diatchenko, the world number 132.

Sharapova, the 2004 champion, was joined at the exit by 2011 and 2014 winner Petra Kvitova who was stunned by Belarusian world number 50 Aliaksandra Sasnovich.

However, two-time men’s champion Rafael Nadal and three-time winner Novak Djokovic eased into the second round.

Sharapova was cruising to victory at one stage on Court Two with a set and 5-2 lead before qualifier Diatchenko shrugged off a back injury to win 6-7 (3/7), 7-6 (7/3), 6-4 after more than three hours of tense action.

Sharapova, playing Wimbledon for the first time in three years after missing 2016 through a drugs ban and 2017 due to injury, gave up the match on her 11th double fault.

It was her earliest exit at a Slam since a first round defeat at the 2010 Australian Open.

“It’s always tough to assess your motivation levels after a first round loss but I won’t shy away from learning from my errors,” said 31-year-old Sharapova.

Eighth seed Kvitova was the bookmakers’ favourite for a third Wimbledon crown after winning five titles in 2018, including the grass-court tournament at Birmingham last weekend, while amassing an WTA Tour-leading 38 match victories.

Kvitova is the fourth top 10 women’s seed to lose in the first round.

World number one Nadal breezed into the second round with a 6-3, 6-3, 6-2 win over Israel’s Dudi Sela as the Spaniard returned to action for the first time since claiming his 11th French Open title.

Nadal, the Wimbledon champion in 2008 and 2010, also managed to avoid falling victim to a player ranked outside the world top 100 for what would have been the fifth time in his last six visits to the All England Club.

“I’m just happy to be through of course and yes, this match gives me positive feelings,” said Nadal after seeing off world number 127 Sela.

Nadal, the 17-time major winner, has not got past the fourth round since finishing runner-up to Novak Djokovic in 2011.

Djokovic reached the second round with a 6-3, 6-1, 6-2 win over Tennys Sandgren of the United States.

Djokovic, seeded 12, was back at the tournament where last year he was forced to retire from his quarter-final against Tomas Berdych with an elbow injury.

“I thought it was overall quite a solid match. I think he made a lot of errors,” said Djokovic.

After sixth seed Grigor Dimitrov was sent packing on Monday, it was the turn of French Open runner-up Dominic Thiem and Belgium’s David Goffin to pack their bags.

Del Potro, who made the semi-finals in 2013, next faces Feliciano Lopez of Spain who on Tuesday set a record of playing 66 consecutive Grand Slams when he eased past Federico Delbonis of Argentina 6-3, 6-4, 6-2.

The 36-year-old broke the record for straight Slams which was previously held by Roger Federer.

“When I was about to break the record, I thought, wow, I’m going to beat Federer at something!” joked the 70th-ranked Lopez who has lost all 13 matches he has played against Federer in his career.

Out of the shadows: Eugenie Bouchard serves to Gabriella Taylor

World number one Simona Halep started her challenge for a first Wimbledon title with a 6-2, 6-4 win over Japan’s Kurumi Nara.

Halep has arrived at the All England Club on a high after finally winning her maiden Grand Slam crown at the French Open last month.