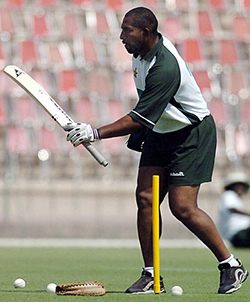 WEST Indies cricket coach Phil Simmons is demanding US$320,000 in damages from Zimbabwe for unlawful dismissal 10 years after he was sacked by the African side.
A tribunal ruling is expected “anytime soon”, according to his lawyer.
Simmons first dragged Zimbabwe Cricket (ZC) to court in 2009 seeking compensation after he was dismissed in 2005 with two years still remaining on his contract.
NewZimbabwe.com has established that the case is now awaiting arbitration after the Labour Court in Harare struck it off the roll.
The court directed Simmons’ lawyer, Jonathan Samkange, to have the matter before a tribunal to determine the actual damages due to the 52-year-old Trinidadian.
“We are now awaiting judgment from the arbitrator,” Samkange told NewZimbabwe.com.
“We should have the determination anytime now. The case was heard two months ago.”
In addition to $50,000 in unpaid salaries, Simmons is also demanding $195 000 as damages for the remainder of his contract – which was initially scheduled to expire in August 2007 at a rate of “$15 00 per month plus interest from August 2007 to date of full and final payment,” according to court papers in our possession.
The coach also wants an extra $75,000 as six months’ notice stipulated in his contract with ZC.
In the court papers, ZC admit owing Simmons $50,000 in outstanding salaries and has twice, in 2007 and 2009, offered an out-of-court settlement and full payment of $60,000 which was turned down.
Under his contract, Simmons was to earn $10,000 in his first year, $12,500 in the second year and $15,000 in the third.

Now in charge of his native West Indies … Phil Simmons