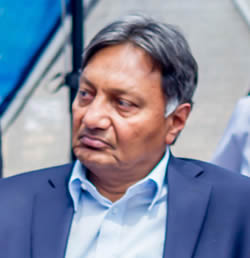 ECONOMIST and University of Zimbabwe lecturer Ashok Chakravarti has challenged the finance ministry to consider the introduction of a new local currency backed by a diaspora bond.
Speaking during a post-budget seminar held by parliament in Harare on Monday, Professor Chakravarti suggested another possible option for eliminating the current cash shortages.
He has previously advocated adoption of the South African rand, an option rejected by the Harare government. Zimbabwe abandoned its own currency in 2009 after it was rendered worthless by inflation.
On Monday, Chakravarti said Zimbabwe’s financial challenges require a solution outside printing bond notes introduced in December 2016 and backed by an “unreal Afrexim facility”. The only economically sensible options Zimbabwe has include adopting the rand or launching a new currency.
“Some countries, if they cannot re introduce their own currency, they adopt the currency of their main trading partner,” said Chakravarti.
He added, “In our case our main trading partner is South Africa so it means we adopt the rand. Adopting the rand, it does not mean falling under the Reserve Bank of South Africa.
“Second option is you adopt your own national currency and we have to face this possibility.
“Bringing in a new national currency has its certain conditions because there is lack of trust. But it has been done in other countries like Latin America and all we have to do is learn from them.”
According Chakravarti, who was economic advisor to the previous Robert Mugabe-led government, printing a new currency, a much dreaded option, can be the best if the move is backed by a real diaspora bond.
“I have a proposal which I think will cost Zimbabwe nothing to introduce the new Zimbabwean dollar and this is the first forum in which I am announcing it,” he said.
“I believe that it is possible for us to actually release a diaspora bond of $1 billion. This diaspora bond can back the introduction of a new Zimbabwe dollar.”
He said the bond must be managed by an international bank outside Zimbabwe as local managers no longer command investor confidence and trust.
“If I am not in the diaspora I will not invest a thousand dollars or a hundred thousand dollars in the current reserve bank because of lack of trust or confidence. There are good people there, they are trying their best but we have a history,” Chakravarti said.Advertisement

“Take the money that comes from the diaspora bond, you actually hire an international investment bank to hold those monies. It can be any bank which comes here with the best proposal.
“If I am a diaspora person with $10,000; I am putting my money in that bond but I know that money is being held in Europe or in London, not here, nobody can take it. If I want to liquidate that bond I can liquidate it because there is real money.”
Commenting on rand adoption, he said the central bank is also yet to provide sound counter arguments on why it cannot be done.
However, informal discussions have pointed to politically rooted fears of compromising the country’s sovereignty and independence.
“What we are saying is that we informally adopt the rand like we did in 2009. We have informally adopted the US dollar, we can informally adopt the rand. At least if we adopt we will have enough circulation and it will maintain its value.”
Zimbabwe needs about $1 billion currency notes to do away with the shortages but is currently at less than half the demand.