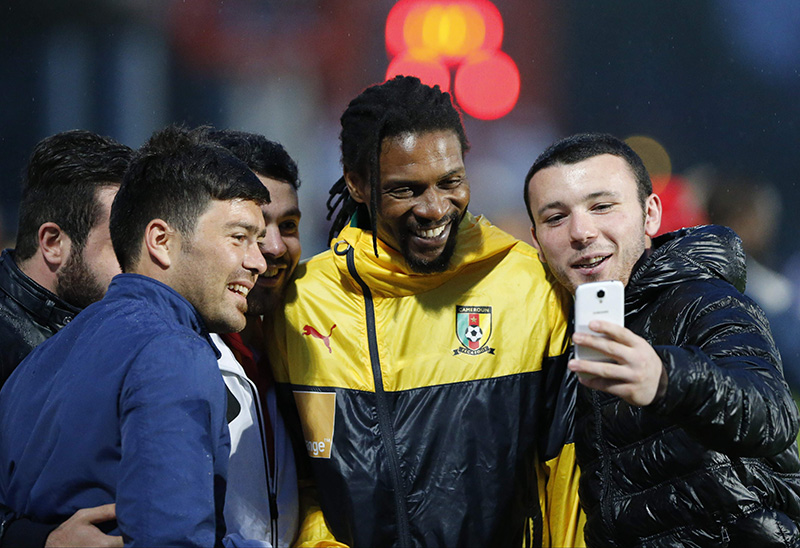 Former Cameroon star Rigobert Song (C, pictured May 2014) is coaching the Olympics squad, who are expected to emerge overall winners in the second leg of a first-round qualifier for the 2020 Tokyo Games
Spread This News

Former Olympic football gold medallists Cameroon began their qualifying campaign for the 2020 Tokyo Games with a 3-0 home victory over Chad on Friday.

The teams meet again Tuesday in N’Djamena in the second leg of a first-round qualifier and it would now be a major shock if the Rigobert Song-coached Cameroonians did not emerge overall winners.

Spain-based Martin Hongla put the ‘Indomitable Cubs’ ahead after only eight minutes in Yaounde by winning and converting a penalty.

Eric Ayuk, who plays his club football in Turkey, bagged a second-half brace, scoring after 48 and 65 minutes to complete a routine win over lowly-ranked opponents.

Former Cameroon star Song, whose club career included a season at Liverpool, is coaching the Olympics squad after recovering from a life-threatening brain aneurysm two years ago.

His 137 appearances for the central African country is a national record and the centre-back played at eight Cup of Nations and four World Cup tournaments.

Cameroon won the 2000 Sydney Olympics gold medals, coming from two goals behind to draw 2-2 against Spain, then winning the final on penalties.

They made the quarter-finals in Beijing eight years later, but failed to qualify for the London or Rio de Janeiro Olympics.

To reach Tokyo, Cameroon must win three home-and-away qualifiers, then finish among the top three in an eight-nation tournament to be hosted by Egypt next November.

Niger and eSwatini (formerly Swaziland) forced away draws in other first legs, giving them slight advantages ahead of the return matches.

Aboubacar Anahikoy put Niger ahead and Cedric Badolo levelled for Burkina Faso before half-time in a 1-1 stalemate in Ouagadougou and Mozambique and eSwatini drew 0-0 in Maputo.

Olympic qualifiers are restricted to under-23 players, but teams can choose three over-age ‘wildcards’ for the 16-nation finals.