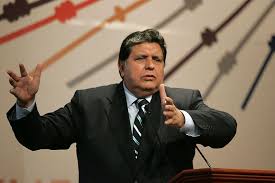 Disgraced Peruvian President Alan García blew his brains out Wednesday as cops rushed to arrest him in connection with a huge corruption probe.

Current President Martinez Vizcarra said the 69-year-old head of state died after undergoing emergency surgery for a self-inflicted gunshot wound to the head at the José Casimiro Ulloa Hospital in Peru’s capital.

Garcia was a populist firebrand who twice ruled Peru and more recently was under investigation related to Latin America’s largest graft probe.

Prosecutors said they believed the former president received more than $100,000 in bribes from Odebrecht, a huge Brazilian conglomerate, disguised as a payment to speak at a conference in Brazil.

Garcia professed his innocence and said he was being targeted politically.

Local television program “Hablemos Claro” reported that when police arrived at García’s residence to arrest him, the ex-president shut himself in his room to take his life.

Garcia had been one of nine people a judge had ordered arrested for alleged involvement in bribes distributed by Odebrecht.