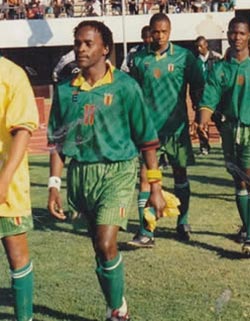 FORMER Warriors, Zimbabwe Saints, AmaZulu and Highlanders midfielder Nqobizitha Maenzanise has died. He was 44.
Maenzanise died at Mpilo Hospital in Bulawayo on Sunday night after a short illness and is expected to be buried at West Park Cemetery on Wednesday.
He is survived by wife Kwanele and daughter Nozipho, who are both based in South Africa and were expected in Bulawayo on Tuesday morning.
Nicknamed Humpty Dumpty during his days at Highlanders in the late 1980s, Maenzanise rose to prominence as part of the Highlanders Under-19 side that took part in the Aberdeen Youth Football Festival in Scotland in 1987.
That team included Adam Ndlovu, Ronnie “Jeans” Johwa, Makheyi “Ninja” Nyathi, Thulani Nxumalo, Henry Nyandoro, Nhlanhla Sithole, Sidney Zimunya, Ernest Ncube, Nkululeko Dlodlo, Sijabulisiwe Ndiweni, Vusa Nkomazana, Dampion Ngwenya, Mbonisi Mthombeni, Abraham “Nejani” Mbambo and Thulani Gumede.
He went on to feature prominently for the Highlanders first team, playing alongside greats like current Highlanders goalkeepers coach Peter “Captain Oxo” Nkomo, the late Mercedes “Rambo” Sibanda, current Highlanders welfare manager Willard Mashinkila Khumalo, Alexander Maseko and Lazarus “Lulu” Mwambopo among others.
His former coach at Highlanders, Cosmas “Tsano” Zulu, described Maenzanise’s death as a great loss to the football fraternity.
“Maenzanise was the kind of player who would give you 300% on the field of play and he was very competitive and did not like to lose,” Zulu said.
“I remember when we were in Scotland in 1987 and Maenzanise wanted to beat up the late Adam Ndlovu at halftime because Adam had missed a couple of chances in the first half and that is how he was because even at training, he would be livid when his team lost.”
Zulu went on to describe the late Maenzanise as a skilful midfielder in the mould of former greats like Stanford “Stix” Mtizwa, Joel Shambo and Achieford Chimutanda.
“Maenzanise was a very skilful player and it is just unfortunate that at the beginning of his career he was misunderstood a lot as nobody could understand his character,” Zulu said.
“He matured with age but I think it was a bit too late for him because in his early days he should have played for the national team, but this was not to be because of poor disciplinary record.”Advertisement

Maenzanise later crossed the great divide to join Bosso’s city rivals Zimbabwe Saints in 1989 before moving to South Africa in the early 90s.
He returned to Zimbabwe in 1996 and joined AmaZulu in the Southern Region Division one league and helped the side win promotion into the top-flight.
The Jackal, as he was known to Usuthu fans, starred for the expensively assembled Delma Lupepe-owned side until his retirement.