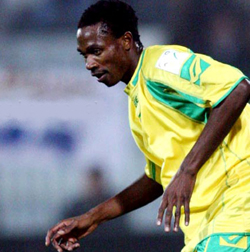 VETERAN former Warriors winger and Tsholotsho Football Club striker Joel Luphahla says he will hang up his boots in peace after helping his home team survive relegation from the Castle Premiership.
Luphahla, who has seen international duty in Cyprus and South Africa, joined Tsholotsho in the middle of the season with the sole aim of making sure they will not be relegated, together with veterans Siza Khoza and Danisa Phiri.
And that was achieved last Saturday, thanks to Dynamos who beat Buffaloes 1-0 while Tsholotsho managed a 1-1 draw against Harare City in their final game of the season.
“I am happy for the boys, they fought all the way. There is so much potential in the team and for us to have a second season in the PSL is not only good for football and the boys, but also for the people of Tsholotsho.
“I will continue to support them next season because I don’t think my legs can carry me anymore, there are young and capable players who can do the job for the team and they deserve a chance in the team.
“I would like to pay tribute to the team sponsor Mr Manyathela, players, technical team and our fans and every Tsholotsho person who saw this dream come true,” Luphahla said.
Coach Lizwe Sweswe said it was up to the former Highlanders striker to decide his future, but would welcome him if he decides to continue playing.
“It was a baptism of fire for us, but I am glad we are still in there and we look forward to 2016. The boys learnt a lot and perhaps the best way to avoid having to spend the whole season fighting relegation is to have a good start, especially in the opening 10 games of the season.
“That will build stability as the season progresses,” Sweswe said.
Sweswe was assisted by former Highlanders coach Bongani Mafu in the last eight games of the season.
The big mission for now is to ensure a stadium is built so that the team moves back to Tsholotsho as they were using White City Stadium in Bulawayo, 115 km away, as their home ground.
A mission to build a 5000-seater stadium started by then Minister of Information Jonathan Moyo fizzled into thin air despite a target of completing the venue in a record six months. Nothing has been heard of the stadium plans until now.
Engineers from Bulawayo and a local firm JR Goddard were on the ground to do the preliminary work, but it seems lack of funding stalled the project.Advertisement