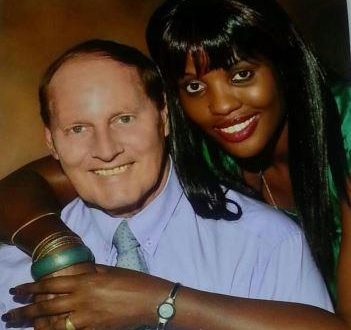 SPAR Supermarket Zimbabwe has apologised to veteran journalist and former Zimbabwe Broadcasting Corporation (ZBC) news anchor Dave Emberton who was “mistakenly” arrested Tuesday morning for shop lifting.
Emberton was accused stealing a packet of bacon in Letombo Spar Supermarket in Greendale suburb, Harare.
The frail ex-broadcaster’s picture in hand-cuffs and sitting in a police station, went viral on social media this week with some blaming his former employers for his now desperate circumstances.
Spar managing director Zimbabwe Terrence Yeatman issued the apology via a video posted on social media having lunch with Emberton.
Yeatman said the former broadcaster suffers from mild dementia which he said was responsible for the “minor incident”.
He called the incident “unfortunate and embarrassing” and blamed his security team for failing to handle it properly.
“There was an incident in one of our stores with Mr Dave Emberton. We acknowledge as Spar that we could have handled the incident differently,” said Yeatman.
“From the Spar side we have apologised for the way things were handled and we hope this can go a long way.”
The Spar boss also appealed to the British Embassy officials in Harare to grant Dave’s wife Melody Kumora a visa to enable her to travel to United Kingdom as she had tried several times and been refused entry.
“Mr Emberton has recently gotten married this year to a beautiful wife and they really are trying to get to go back to Britain. Dave’s got a British passport and they would like to settle there,” said Yeatman.
“His wife has been denied a visa two or three times, I think it is; so we are appealing to the British High Commission that please acknowledge Mr Emberton’s request for his wife to get a visa to relocate to the UK.
“The Emberton family does feel he would be best helped in the UK.”
Responding to the apology, Dave said he appreciated the support he got from friends around the world
“The support for me and my wife has been tremendous and I truly appreciate the support.”
Emberton worked in the broadcasting industry for the last 48 years.
He is one of the longest serving broadcasters in the country and was once ranked among the top three news presenters with Joseph Madimba and Collin Harvey. He stopped anchoring the main news at the state broadcaster in 2014.Advertisement

Dave said he got his first job in February 1966 at Montrose Studios in Bulawayo at the age of 19 where he was working as a floor manager.
He once worked at MultiChoice Zimbabwe as operations manager and also hosted a number of other television shows like talent shows, quiz shows, sports programme amongst many others.
He also tried acting and appeared in film tilted Enigima The Secret of The Circle.
Those who want to assist Dave can send funds to Kumora’s Ecocash account 0777883472. Alternatively, funds can be set to her account NMB 270084346, Swift Code NMBLZWWX.