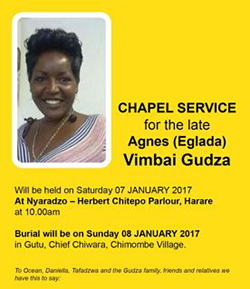 THE local media industry was last week thrown into mourning following the death of yet another journalist Agnes Gudza, 32, who passed away Thursday evening at Parirenyatwa hospital in Harare.
Gudza, a former producer with the Zimbabwe Broadcasting Corporation (ZBC), had been unwell for quite some and succumbed to kidney failure and meningitis.
Family spokesperson and sister to the late scribe, Tsungirirai Gudza told NewZimbabwe.com that the family had lost “an intelligent, hardworking woman who leaves behind three young children”.
Gudza also worked with Transit Crew, Fungisai Zvakavapano and many other local artists. She also worked for Flame News as an Entertainment Editor.
A church service was scheduled for Saturday at Nyaradzo Funeral Parlour along Herbert Chitepo Avenue in Harare.
Gudza was expected to be buried Sunday at Chimombe Village in Gutu.
Lucy Yasini who worked with Gudza at ZBC described her as a brilliant journalist who was dedicated to her work.
“We are at a loss for words,” said Yasini.
Elia Ntali, a fellow journalist, described Gudza as a jovial person who was ready to work with anyone.
Meanwhile, the Movement for Democratic Change MDC has joined the media fraternity and the nation at large in mourning veteran journalist Bill William Saidi, 79, who died last week in Zambia.
In a statement, Kurauone Chihwayi MDC National Spokesperson said Bill would be remembered for his mature, educative and well researched articles and literature that has endless life.
“Saidi shall be remembered as a hero for today and future generations. It is such characters like Bill Saidi who should be honoured for their contributions to the growth of literature in Zimbabwe and Africa.
“Zimbabwe has lost a great journalist and mentor who during his time in Zimbabwe and Zambia exhibited the missing skills in literature,” said Chihwayi.
Chihwayi described Saidi as a writer par excellence whose literature contributed to the development of Zimbabwe in a big way.
“He belonged to that league of great novelists and journalists who had an unquestionable penchant for their country. His ethical and professional approach shall be missed by many,” the spokesperson said.
Saidi has also been remembered by Zapu leader Dumiso Dabengwa, Zimbabwe Union of Journalists (ZUJ) and Media Institute of Southern Africa (MISA) who all described the late Saidi as an ethical and professional journalist full of knowledge.Advertisement