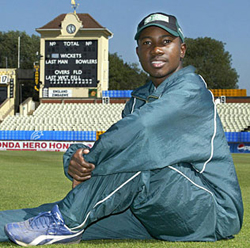 FORMER Zimbabwe Test captain Tatenda Taibu has signed for Liverpool and District team Hightown St Mary’s.
Taibu, 32, played 28 Test matches and 150 one-day internationals for Zimbabwe prior to retiring in 2012.
“When he explained who he was I thought it was a hoax,” Hightown publicity officer Nick Gordon said.
“The conversation developed, we got references from people in the game in Zimbabwe and we’ve talked ever since. It’s a real coup for us.”
The wicketkeeper-batsman could make his debut for the Second Division side when they play Alder on 24 April.
Speaking to BBC Radio Merseyside, Gordon said Taibu approached the club after they had advertised for an overseas player for the summer.
“It’s not every day that a club like Hightown St Mary’s signs a player like Tatenda,” Gordon said.
“I had to do a double take, it was so unusual. We put out an advert for young players but he said ‘I’m not a young player, I’m a retired Test cricketer.’
“This guy has played at an incredibly high standard of cricket and we are happy to take the risk. Even if he hasn’t picked up a bat since 2012, he will be more than sufficient for our needs this summer.”
Signing the former international, who scored 1546 runs in 28 Test matches, also came as a shock to Hightown’s players as well as their rivals.
“It was utter disbelief at the beginning,” Gordon explained.
“The players thought it was a wind-up but, over time, people are excited about him coming over. It’s not every day we get this opportunity at club level.
“There’s certainly some envious eyes – I’ve seen some comments on Twitter asking how on earth we pulled it off. But people are looking forward to playing against him.
“These are guys who work nine-to-five, Monday-to-Friday, and they’re going to turn up on a Saturday and play against an international Test captain.
“It’s great for local cricket as well.”Advertisement