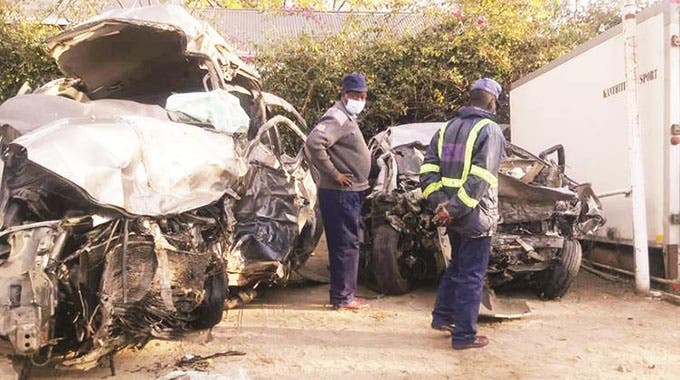 Spread This News
By Staff Reporter
FOUR members of the Zion Apostolic Church who were coming from an all night prayer died on the spot when the vehicle they were travelling in crashed on a road leading to a disused mine at Buchwa Mountain in Mberengwa.
Midlands Provincial police spokesperson Emmanuel Mahoko said police in Zvishavane are already investigating the case.
“Police in Zvishavane are investigating a fatal road accident where four people died on the spot after the vehicle they were travelling in overturned and rolled several times. The incident occurred on 10 August 2021 at around 0420hrs in Buchwa mountain,” said Mahoko.
Circumstances are that Casper Bangure (40) was on his way back from an all night prayer driving his vehicle uphill along an unnamed disused mine road on top of Buchwa Mountain in Mberengwa and  had three passengers on board Joyful Mlhanga aged 39, Miriam Mhaka aged 15 and Pamela Ngonidzashe aged 31, all of them were Zion Apostolic Church Members.
“Upon approaching a steep ascent along the said road, the vehicle’s engine stalled. The vehicle rolled backwards, overturned several times downhill before landing on its wheels at a distance of about 200metres. All the occupants were thrown out of the vehicle and died on the spot,” Mahoko said.
The matter was reported to the police and the scene was attended together with community members who helped to retrieve the bodies.
The bodies were conveyed to Zvishavane District Hospital Mortuary awaiting post-mortem.
“Motorists are encouraged to check road worthiness of their vehicles before embarking on a journey. They should also avoid taking risks by travelling on disused and dangerous roads,” said Mahoko.