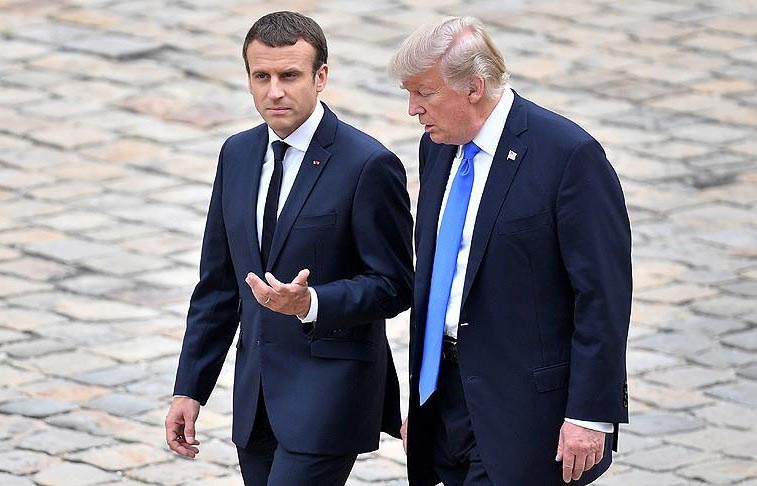 PRESIDENT Emmanuel Macron asserted Sunday that Paris had convinced Donald Trump to stay engaged in Syria “for the long-term”, adding that French air strikes did not amount to a declaration of war against the regime of Bashar al-Assad.

A day after France joined the United States and Britain in launching unprecedented strikes against regime targets, Macron insisted the intervention was legitimate and urged international powers to now push for a diplomatic solution to the brutal seven-year war.

“We have not declared war on the regime of Bashar al-Assad,” the 40-year-old centrist said at the start of a combative TV interview, stretching nearly three hours, to mark almost a year in office.

But Macron again argued his first major military intervention as president was necessary to send a signal that the use of chemical weapons against civilians would not go unpunished.

Saturday’s strikes targeted three alleged chemical weapons facilities in response to what the West says was a gas attack on the town of Douma that killed dozens of people.

“We have full international legitimacy in intervening in this case,” Macron said.

He said the US, France and Britain targeted “extremely precise sites of chemical weapons use” in an operation that went off “perfectly”.

And he further argued the operation was legitimate despite not being sanctioned by the UN, retorting that under a 2013 UN resolution Syria was supposed to destroy its chemical weapons arsenal.

As for his allies, Macron suggested France played a pivotal role in changing Trump’s mind on the need to stay involved in the conflict.

“Ten days ago, President Trump was saying the United States of America had a duty to disengage from Syria,” Macron said.

“I assure you, we have convinced him that it is necessary to stay for the long-term,” he told veteran journalists Jean-Jacques Bourdin and Edwy Plenel, charged with the two-hour grilling on BFMTV.

And in a reference to Trump’s raging on Twitter at Russia over the possibility of strikes, Macron added: “The second thing is that we have also convinced him that he must limit his strikes to chemical weapons, at a time when there was a media furore via tweet, as I’m sure you noticed.”

Despite soaring tensions with Russia, Macron stressed the need to “talk to everyone” in pursuing a Syrian settlement, saying his plans to visit Moscow in May remain unchanged.

Like Trump and British Prime Minister Theresa May he has faced a domestic backlash for striking Syria without consulting parliament, but he defended the move as well within his constitutional powers.

Macron also took the opportunity to hit out at newly re-elected Hungarian Prime Minister Victor Orban, whose views on Europe could hardly clash more with his own vision of closer integration.

“I share none of his values, but there he is,” Macron said, expressing worry at the rise of what he called “illiberal democracies” in Europe.

Macron’s decision to volunteer for a marathon live TV grilling by two combative veteran journalists was seen as a bold move ahead of the May 7 anniversary of his election victory, which swept away the traditional left and right.

His approval ratings have fluctuated over a year in which he has pursued major reforms, which he insists are his mandate despite staunch opposition from some sectors of society.

Macron acknowledged the anger that his reforms, including a loosening of France’s famously rigid labour laws and a shake-up of heavily-indebted rail operator SNCF, were causing frictions.

“I hear all this anger,” he said, notably in reference to rail workers who have launched three months of rolling strikes.

He said he had promised on the day of his election to “reconcile the country”, but said this “couldn’t be done overnight”.

He reserved little sympathy, however, for the students blocking several university faculties across the country in protest at plans to make admissions more selective.

He dismissed the protesters as “a minority” in most cases, repeating accusations that “professional” trouble-makers were joining the blockades.