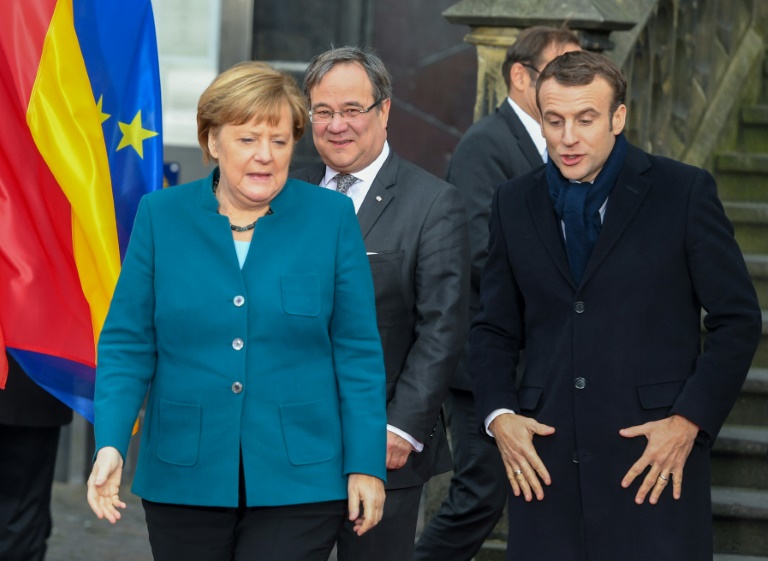 France and Germany Tuesday signed a new friendship treaty to deepen their alliance at a time of crisis for the EU, drawing fire from the far right which President Emmanuel Macron slapped down for “spreading lies” about the pact.

Macron and German Chancellor Angela Merkel inked the accord to deepen ties as Britain prepares to leave the European Union and tensions rise with populist leaders.

The treaty pledges stronger political, economic and defence ties and restates their commitment to the European Union.

The document has come under attack from the far right, which accuses the pair of signing away national sovereignty.

The leader of France’s National Rally, Marine Le Pen, accused Macron of “an act that borders on treason”.

And a co-chief of Germany’s far-right AfD party, Alexander Gauland, charged that Paris and Berlin were seeking to create a “super EU”.

“We as populists insist that one first takes care of one’s own country,” said Gauland. “We don’t want Macron to renovate his country with German money.”

Macron condemned the allegations, saying that “those who forget the value of French-German reconciliation are making themself accomplices of the crimes of the past”.

“Those who… spread lies are hurting the same people they are pretending to defend by seeking to repeat our history.”

Macron said the treaty “shows that our friendship between France and Germany, our common project and our ambition for Europe are what really protect us, and what allow us really to take back control of our lives and to build our destiny”.

Tuesday’s signing ceremony took place in the German city of Aachen, on the Dutch and Belgian borders — a place rich in European symbolism as the seat of power of Charlemagne, the 9th-century European emperor.

It was held on the anniversary of a friendship pact signed in 1963 by Charles de Gaulle and Konrad Adenauer.

The new accord aims to strengthen the “Franco-German motor” seen as the driving force behind European integration.