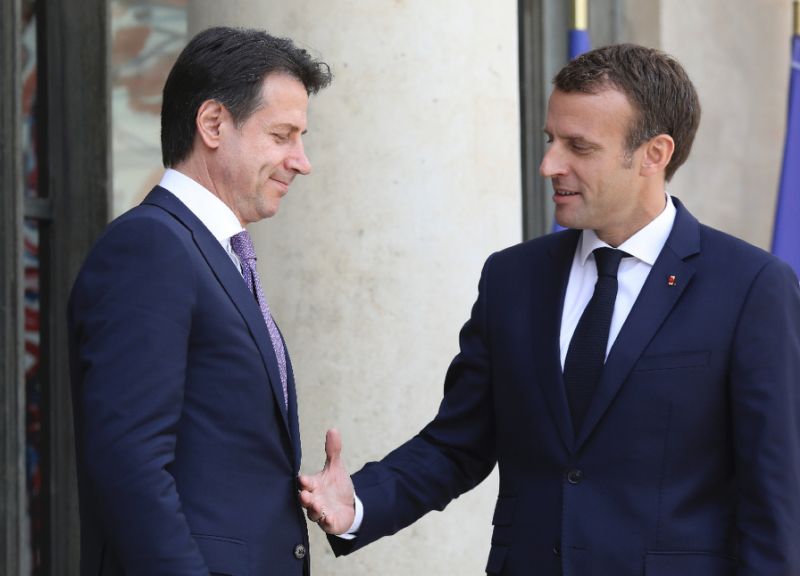 FRANCE and Italy on Friday called on the European Union to set up asylum processing centres in Africa to prevent “voyages of death” by migrants across the Mediterranean, in a crisis that has divided Europe.

At a meeting in Paris President Emmanuel Macron and Italy’s new premier Giuseppe Conte also called for “profound” changes to the EU’s asylum rules, which put the migrant burden on their port of entry to Europe — mainly Italy and Greece.

The two leaders were at pains to put on a united front after a bitter row this week between Macron and the new populist government in Rome over Italy’s rejection of a rescue boat with hundreds of migrants on board.

The clash underscores deep splits in Europe over how to handle the massive influx of migrants from across the Mediterranean in recent years.

In Germany, Chancellor Angela Merkel is embroiled in a showdown with the right wing of her governing coalition, which is demanding that she immediately ditch her liberal migration policy and tighten border controls.

Conte called for “European protection centres” to process asylum claims in migrants’ countries of origin — currently mainly Africa — “before their arrival in Europe”.

“We must prevent these voyages of death,” he said of the perilous crossings in flimsy boats.

His comments were echoed by Macron, who said EU members should send immigration officials “to the other side” of the Mediterranean.

The French leader, who sparked fury in Rome this week by accusing Italy of “cynicism and irresponsibility” for leaving 629 migrants drifting at sea, also called for tighter controls of the EU’s external borders.

“We cannot take in everybody,” he said, repeating his view that those not fleeing war should be sent home.

He said France and Italy should team up with Spain and Germany to come up with “new initiatives” to resolve the crisis.

There have been few signs that European leaders are ready to coordinate their policies despite a looming end-of-June deadline to change the EU’s current asylum rules.

In Berlin, Merkel was fighting Friday to save her government, with her interior minister Horst Seehofer openly defying her moderate line on migration.

An opinion poll by Infratest Dimap suggests 62 percent of Germans back the tougher stance favoured by Seehofer, including turning back undocumented migrants at the border and deporting failed asylum seekers faster.

The Aquarius rescue ship at the centre of this week’s row and its accompanying vessels is nearing Spain, which agreed to take in the migrants after Italy and Malta refused it permission to dock.

Italy’s hardline new interior minister Matteo Salvini said he hoped the boat would get “a rousing welcome” in Spain and called for more “men and money” to defend the EU’s frontiers.

“We have had enough of being pushed around by others,” said Salvini, who has joined forces with the German and Austrian foreign ministers in an “axis of the willing” against illegal immigration.

Prime Minister Pedro Sanchez of Spain, where the Aquarius is expected to arrive on Sunday, called on Twitter for “a new Europe where national egoism does not prevail”.

Under the EU’s Dublin Agreement, which is currently up for review, migrants must apply for asylum in the first EU country they enter.

The surge in arrivals in the past three years has fuelled the rise of anti-immigration parties — like Salvini’s League party — and split Merkel’s ruling conservatives.

The path taken so far by the refugee ship Aquarius

Italy’s new government this week hit out at Macron for giving “hypocritical lessons” on migrants and summoned the French ambassador.

Macron later said “none of his comments were intended to offend Italy”.

His critics said he was hardly in a position to lecture, noting that France had taken in far fewer migrants than the likes of Germany and Sweden, and virtually shut its border to migrants arriving from Italy.

In a gesture of reconciliation the French foreign ministry said it was ready to welcome migrants aboard Aquarius who “meet the criteria for asylum” after they arrive in Spain.

Italy itself has appeared eager to avoid too harsh a response. After turning the Aquarius away, it allowed a coast guard ship carrying over 900 migrants to land on Sicily on Wednesday.

And on Thursday, the Italian coast guard brought fresh supplies to the Aquarius as it made its way past Sardinia.