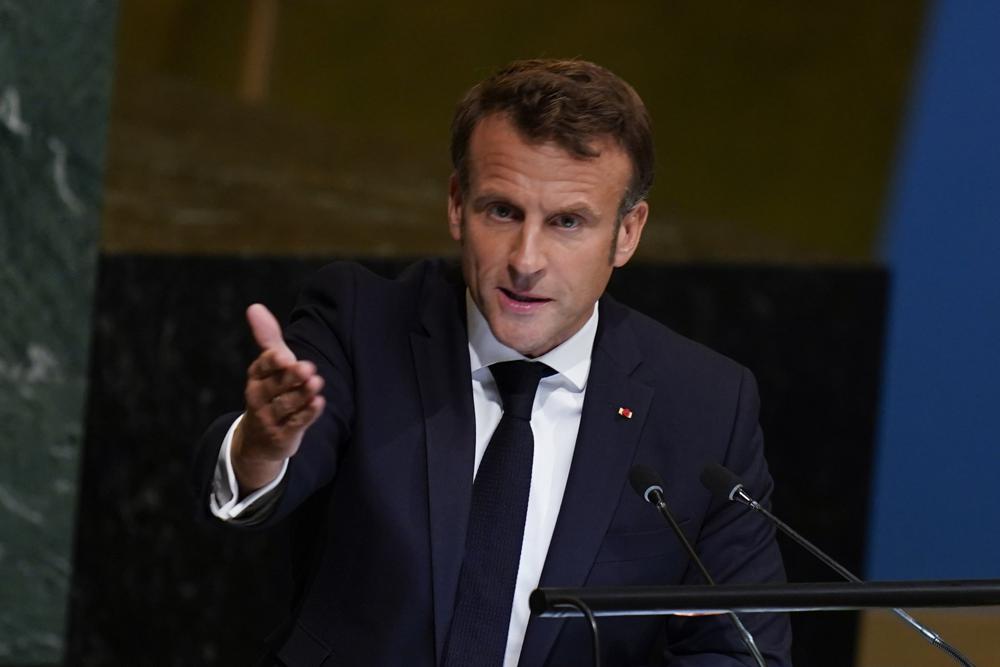 UNITED NATIONS: French President Emanuel Macron admonished countries Tuesday not to stay neutral about condemning Russia’s war in Ukraine as he declared that Moscow’s invasion amounts to a new form of imperialism.

Speaking to the U.N. General Assembly gathering of world leaders, Macron also insisted that any negotiation to end the more than six-month-old war can succeed only “if Ukraine’s sovereignty is respected, its territory liberated and its security protected.”

The war in Ukraine — and its effects on food prices, fuel costs, Ukrainian nuclear power plants, and the larger context of tensions between Russia and the West — is looming over the annual gathering of presidents, prime ministers, monarchs and other dignitaries. Neither Russia nor Ukraine has yet had its turn to speak during the nearly weeklong series of speeches.

Macron made the war the centrepiece of his speech, arguing that the conflict threatens to usher in a world where “the security and sovereignty of everyone no longer depends on a balance of strength, on the strength of alliances, but rather that of armed groups and militias.”

“Who here can defend the idea that the invasion of Ukraine justifies no sanction?” he asked. “Who of you here can consider that the day when something similar with a more powerful neighbour happens to you, there’ll be silence from the region, from the world?”

Speaking before him were leaders from Africa who said they do not want their continent to be “ the breeding ground of a new Cold War ” as nations pressure countries around the world take sides in the conflict.

So far, Africa has stayed somewhat neutral on Ukraine. The former Soviet Union backed many African movements that fought to end colonial rule, and Russia’s foreign minister has voiced support for reform of the U.N. Security Council to give African countries permanent seats and greater influence.

In two General Assembly votes soon after Russia’s Feb. 24 invasion of Ukraine, about 140 of the U.N.’s member nations overwhelmingly deplored Russia’s aggression against Ukraine, called for an immediate cease-fire and withdrawal of all Russian forces, and urged protection for millions of civilians. But more than 30 countries abstained, including China, India and South Africa.

On April 7, some 58 nations abstained from voting on a measure calling for Russia’s suspension from the Human Rights Council. It passed, 93-24.

Macron called on the United Nations’ member countries “to act so that Russia rejects the path of war,” and he said that staying out of the matter isn’t an option.

“Those who are keeping silent today actually are, in a way, complicit with a cause of a new imperialism, a new order that is trampling over the current order, and there’s no peace possible here,” he said. “The war in Ukraine must not be a conflict that leaves anyone indifferent.”

“We’re not talking about choosing a camp here between the East and the West, between the North or the South, either,” the French president insisted. “What we’re talking about is everybody’s responsibility — everybody who’s committed to the respect of the (U.N.) Charter and our common, precious good: peace.”

The Kremlin-backed votes, in territory Russia already controls, are virtually certain to go Moscow’s way. Western leaders who are backing Ukraine with military and other support have dismissed the votes as illegitimate.

“Russia declared war, it invaded this region, it bombed it, it killed people, it made other people flee, and now it explains that, in this same region, it is going to organize a referendum,” Macron told reporters before his speech. “If this were not tragic, we could laugh.”