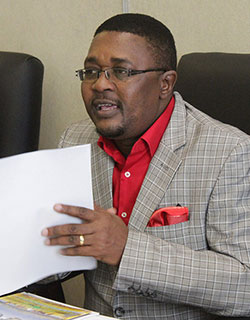 HARARE: French authorities last Friday quizzed Tourism and Hospitality Industry Minister, Walter Mzembi in Paris, France to assess if the future of global tourism would be secure under his stewardship as United Nations World Tourism Organisation (UNWTO) secretary general.
Mzembi is gunning to take over the UNWTO secretary general’s post in 2017, when Jordanian Taleb Rifai leaves the powerful position. He has so far received the backing of the 54-member African Union.
Last month Mzembi was also endorsed by Egypt, one of the countries key to his ascendency to the post. An Egyptian national is among officials who would make the final decision on who will lead the UNWTO.
“Respectful of Africa’s decision, the French authorities wished to hear first-hand from the continent’s candidate for the top UNWTO job, to compare policy thrusts going forward and to satisfy themselves that the interests of the global tourism sector will be in safe hands,” said a statement released by the Zimbabwe Tourism Authority on Tuesday.
The ZTA said Mzembi first met with Jean-Pierre Lacroix, director for United Nations and other international organisations within the French Foreign Ministry.
This was followed by a meeting with Cyrille Pierre, Cabinet director for the Secretary of State for External Trade and Tourism Promotion within the French Ministry of Foreign Affairs and International Cooperation.
France is a member of the UNWTO executive council.
And its support will also be crucial for Mzembi, if he is to land the powerful job when the council that delivers the decision convenes in Spain next Mayto elect Rifai’s successor.
France has one of Europe’s biggest tourism markets, attracting more than 80 million inbound tourists a year.
Official reports indicate that the tourism industry constitutes some 10 percent of France’s gross domestic product.
It directly employs more than two million people.
Mzembi acknowledged that tourism plays an important role in the French economy.
“The importance that France attaches to tourism, in all its multi-faceted aspects, is very clear,” said Mzembi.Advertisement