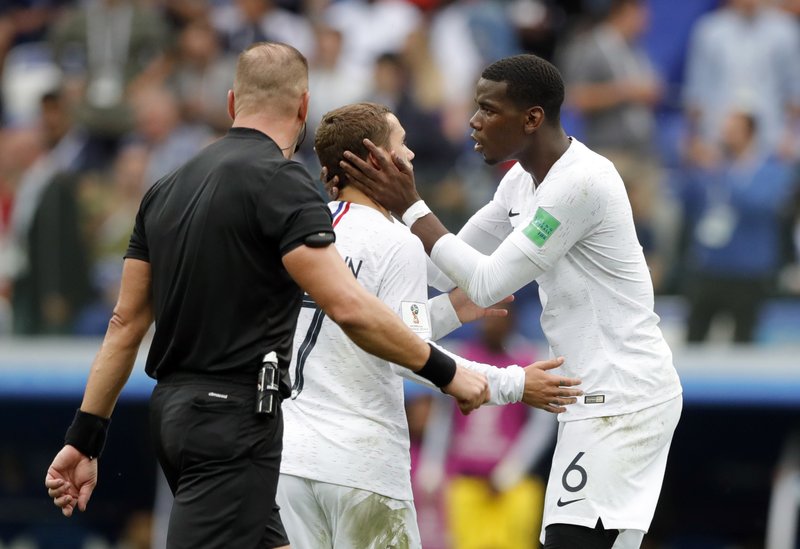 RUSSIA: A shot that flew directly at the hands of the opposing goalkeeper turned into a World Cup goal for Antoine Griezmann.

The France striker scored the second goal in his team’s 2-0 quarterfinal victory over Uruguay on Friday, sending a seemingly easy-to-save shot at a waiting Fernando Muslera. But the ball hit the keeper on the palms, bounced off and looped over his head and into the net.

The victory gave France a spot in the World Cup semifinals. The 1998 champions will next face either Brazil or Belgium on Tuesday in St. Petersburg.

Griezmann didn’t celebrate what was his third goal of the tournament.

“I was playing against a lot of friends,” said Griezmann, who is teammates with Uruguay defenders Diego Godin and Jose Gimenez at Atletico Madrid, “so I think it was normal not to celebrate.”

Raphael Varane gave France the lead with a header in the 40th minute. Griezmann sent in a free kick from the right side and Varane raced across the area. He got his head to the ball and sent it into the far corner behind Muslera.

Griezmann scored his goal, which was similar to the one scored by Real Madrid forward Gareth Bale against Liverpool goalkeeper Loris Karius in the Champions League final, in the 61st minute.

“We all saw that it was not a very common goal, but Muslera has been a very important pillar for all this process and through all our work on our way up to here, so I’m not going to wash my hands putting any responsibility on my players,” Uruguay coach Oscar Tabarez said. “This is the kind of thing that I will discuss with the players in the locker room.”

Griezmann is a Frenchman who plays professionally in Spain, but he has a special fondness for Uruguay. He likes the traditional South American drink mate, he speaks Spanish like someone from the South American country and he’s been pictured wearing the team’s jersey.

Godin, who was playing for Uruguay on Friday, is also the godfather of Griezmann’s daughter.

France went on to reach the World Cup final the last two times it advanced to the semifinals. They won their only World Cup in 1998 on home soil, and in 2006 lost to Italy on penalties.

The match at Nizhny Novgorod Stadium pitted France’s speed against Uruguay’s stubborn defense and its occasional attacking threats. But with Uruguay striker Edinson Cavani injured and on the bench and Luis Suarez neutralized, it was France that scored the goals.

Suarez, who scored two goals in the group stage, didn’t get a single touch on the ball in France’s penalty area for the entire match. Cavani scored both goals in the 2-0 win over Portugal in the round of 16, but he sat on the bench with an injured left calf he picked up in that match.

Four minutes after Varane gave France the lead, Uruguay nearly equalized. France goalkeeper Hugo Lloris dived to his right and got a hand on a header from Martin Caceres, pushing it just wide of the goal.

“Lloris had a great save,” France coach Didier Deschamps said. “Apart from that, they didn’t have many great opportunities.”

Although he didn’t score, 19-year-old France forward Kylian Mbappe again looked dangerous on the attack, trying to slice in from the right wing or directing quick passes into Uruguay’s defense.

Mbappe, who has modeled his game after Cristiano Ronaldo and is being compared to Zinedine Zidane, also picked up a second-half yellow card for falling to the ground as if in agony after a touch from an opponent.

Mbappe scored twice against Argentina to become the first teenager with multiple goals in a World Cup knockout game since a 17-year-old Pele in 1958.

Heading into the match, Uruguay had been unbeaten in 2018 and Muslera had the best save percentage of any goalkeeper at the tournament who had played more than one match. He had 11 saves and had allowed only one goal in four World Cup matches in Russia.

A country of only 3.5 million, Uruguay won World Cup titles in 1930 and 1950 and then waned. But it has undergone a revival in the last 12 years under the 71-year-old Tabarez, a former elementary school teacher.

The country was trying to reach the semifinals for the second time in the last three World Cups.

“It seems that the four games we won before this one are worth nothing, but that’s not true,” Tabarez said. “Today we played against opponents that were stronger than we were.”