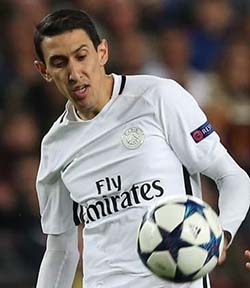 FRANCE: Paris St-Germain’s latest Ligue 1 win ended in controversy as the referee aimed a kick at a Nantes player after they collided – then sent him off.
Nantes finished the game with 10 men as defender Diego Carlos was shown a second yellow card in injury time after the incident with referee Tony Chapron.
Nantes chairman Waldemar Kita said Chapron should be banned for six months for the “scandalous” decision.
But he added: “I do not want to believe he did it on purpose.”
‘It’s a joke’
As PSG broke into the Nantes penalty area, Carlos clipped Chapron’s heels in what appeared to be an accident.
Chapron kicked out at the player, then booked him, apparently for dissent.
“It’s a joke,” Kita told French TV. “I received 20 text messages from all over the world telling me that this referee is a joke.
“If I talk too much, I will be summoned by an ethics commission. We have no right to say anything.”
PSG won their first match back after the winter break with Angel di Maria scoring the only goal of the game after 12 minutes at Stade de la Beaujoire.
The win – achieved despite the absence of £200m signing Neymar – took them 11 points clear at the top of Ligue 1.
Di Maria could have added a second before half-time but missed an open goal, while Nantes’ Emiliano Sala had a goal ruled out for offside on the hour mark.
Neymar missed the game having scored in the midweek Coupe de la Ligue victory over Amiens, with coach Unai Emery suggesting he had a fitness problem.
PSG took advantage of second-placed Monaco being held to a goalless draw in Montpellier on Saturday to extend their advantage at the top.
Lyon moved level on points with Monaco as they drew 1-1 draw at home to Angers.Advertisement