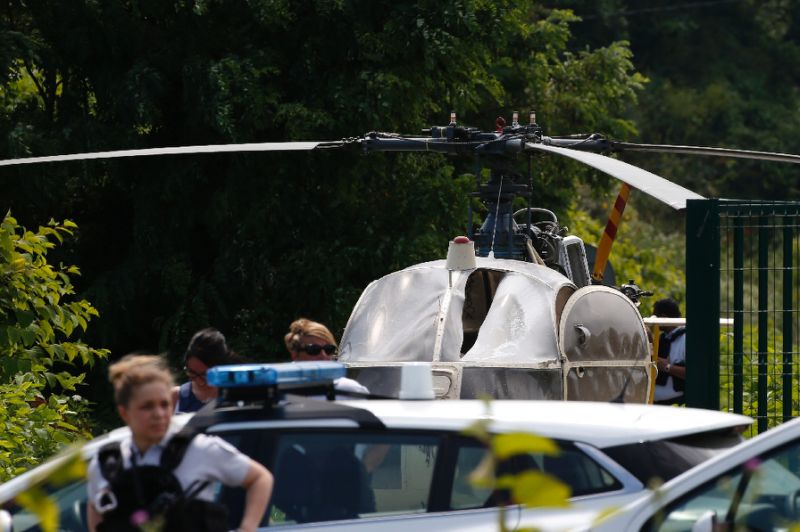 Details emerged Monday of the daring prison escape of notorious French robber Redoine Faid, who used a helicopter in a breakout worthy of the Hollywood heist movies he is known to admire.

The escape by the convict dubbed the “Jailbreak King” by French media, having already broken out of prison in 2013, has raised questions about security at French jails.

An extensive manhunt involving some 2,900 police officers has been launched to track the 46-year-old movie buff, who has said he drew on movie baddies such as Tony Montana in “Scarface” for inspiration.

Faid was sprung from his prison in Reau, 50 kilometres (30 miles) southeast of Paris, on Sunday by two heavily armed accomplices who used smoke bombs and angle grinders to break through doors and whisk him to a waiting helicopter.

The escape brings to at least five the number of jailbreaks in France in the past three decades involving helicopters.

Justice Minister Nicole Belloubet told Europe 1 radio that she had sent inspectors to the prison “to see whether the security measures were defective so that we can rectify them”.

She suggested that Faid had been left in the same prison for too long, giving the career criminal, who has said he found his “calling” at the age of 12, time to plot his escape.

Sunday’s drama began at an airfield northeast of Paris where two men posing as flight school students hijacked a helicopter and ordered the instructor to fly them to Reau prison, stopping off en route to pick up a third accomplice.

On arrival at the high-security facility the pilot landed in the courtyard — the only part of the prison not fitted with anti-helicopter nets.

Redoine Faid made his first escape from prison in 2013, using dynamite to knock down doors
Two black-clad men armed with assault rifles then alighted and set off smoke bombs before breaking into the visiting room, where Faid was meeting with his brother who was later taken into custody.
The wardens, who were unarmed, fled and raised the alarm. But within 10 minutes Faid was gone, cheered on by his fellow inmates.

The helicopter was found shortly afterwards in a suburb northeast of Paris, along with the pilot, who had been beaten and was taken to hospital in a state of shock.

Faid and his accomplices continued their getaway by car, changing vehicles along the way from a hatchback found burnt out in a shopping mall carpark to a white van seen leaving the area with France’s most wanted man aboard.

The van was found on Monday having been torched in the Oise department north of Paris, a source close to the inquiry said.

Faid’s brother who was the only suspect detained thus far was released late Monday after assuring authorities he was not aware of the escape plan, a source close to the case said.

Journalist Jerome Pierrat, who co-wrote a book with Faid about his life, told the Parisien newspaper the gangster was a “charmer” who was popular with his guards.

A warden who knew him from a prison in northern France told AFP he was “always very polite but never showed his hand”.

Belloubet said the gang probably used drones to stake out the prison, which was built on a site surrounded by fields to give a clear view in every direction — specifically to prevent breakouts.

According to excerpts of emails published by the Le Figaro newspaper, regional authorities had warned the prison administration of a “serious threat” of Faid escaping.

An official report in 2013 had flagged security concerns at the facility housing 650 prisoners, particularly in the section for dangerous criminals.

Born into a family of 11 brothers in the gritty northern Paris suburb of Creil, Faid began thieving at an early age.

He also dabbled in drug trafficking before deciding to specialise in cash-in-transit heists.

“He liked adrenalin and wanted to be like the big guys,” a police officer said.

Faid picked up some tricks from former soldiers in Israel, where he hid out from the law for a while, according to police sources.

He himself also claimed to have studied heist movies, learning to plan his robberies meticulously, operate in small teams and disguise himself.

At a film screening in Paris in 2009, he approached Michael Mann, director of the 1995 film “Heat” starring Pacino and Robert De Niro, and told him: “You were my technical advisor.”

In 2013, three years after he claimed in a book to have turned over a new leaf, Faid hit national headlines after using dynamite to blast his way out of a prison in the northern city of Lille.

He took four guards hostage with a pistol before escaping in a getaway car but was recaptured six weeks later at a hotel.

But his stiffest sentence came this year, when he was handed a 25-year term over a botched 2010 robbery in which a policewoman was killed.

His lawyers argued the sentence was unfair, saying that their client was “not a cop killer” and that the officer’s death in a shootout was unintentional.