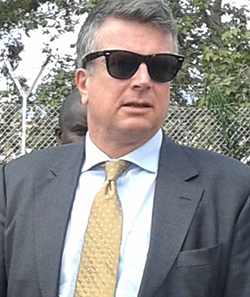 THERE is considerable interest from French companies to invest in Zimbabwe for the long term if the country regularises its relationship with the European Union, France’s Ambassador to Zimbabwe, Laurent Delahousse said on Wednesday.
Frosty relations between Zimbabwe and the EU, which saw the bloc impose sanctions on President Robert Mugabe, his inner circle and selected firms in 2002 over alleged rights abuses, appear to be thawing after the bloc progressively eased the embargo since 2009 when the veteran ruler agreed to share power with the opposition.
While Mugabe and his Zanu PF party regained control of government in another disputed poll in 2013, the EU has continued the rapprochement and will resume direct development assistance to Harare later this year if the European Council of Ministers votes to lift the embargo.
“As you are aware the friendship between EU and Zimbabwe is improving, which is a welcome move. EU will resume its direct cooperation with Zimbabwe at the end of the year, provided everything goes well,” Delahousse said.
He said Zimbabwe’s economic environment was ‘safe and sustainable’ and French companies would provide long-term investments.
“When French companies invest in a country as much as they want to in Zimbabwe, it’s not for a quick buck,” he said.
“They are here to invest for the future, they are here to stay, they are here to create jobs, they want to come back to Zimbabwe and they want to come to a safe and sustainable environment because this is the message that we are receiving from the government.
“We want to come back, we want to help, we want to invest, for the duration, the future. I am talking about 20-year investment plans,” he added.Advertisement