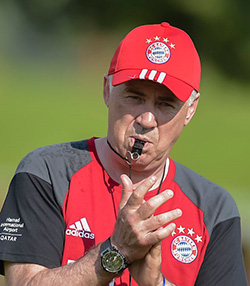 FRANCE: Video technology will be used for the first time in France in the end-of-season play-offs, league officials announced Thursday.
The system will be introduced for the promotion and relegation matches between Ligue 1 and Ligue 2 in May, said French league (FPL) director general Didier Quillot.
“We have adopted in principle video refereeing for the play-offs. It is the first time in official competition,” said Quillot. “We are very happy that this is in France.”
The system will be used on May 23 and May 28.
The use of video technology was brought into sharp focus on Tuesday when Bayern Munich coach Carlo Ancelotti called on Uefa to introduce the system after the Germans lost a controversial Champions League quarterfinal second leg to Real Madrid in extra time.
Cristiano Ronaldo scored a hat-trick to become the first man to score 100 Champions League goals as holders Madrid completed a 4-2 win on Tuesday, going through 6-3 on aggregate.
However, the Portuguese’s second and third goals were offside.
“In a quarterfinal you have to put a better referee, or it is the moment to introduce video refereeing, which is what Uefa are trying because there are too many errors,” said Ancelotti.Advertisement