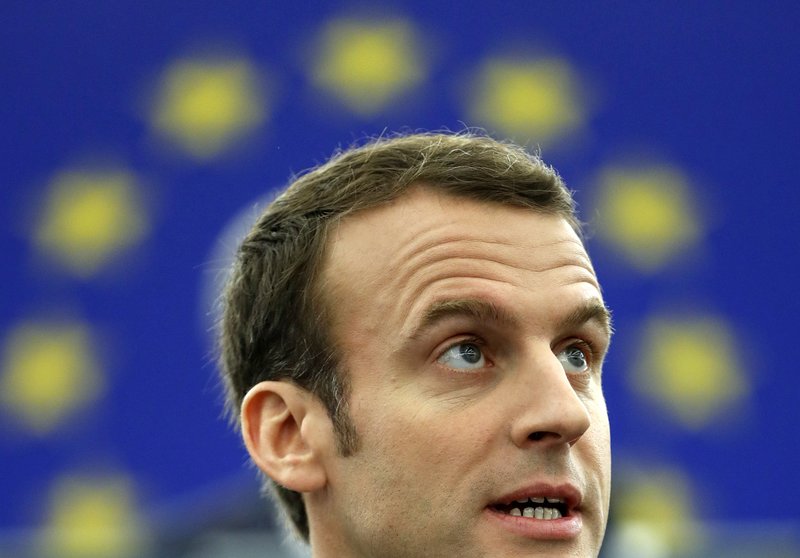 STRASBOURG: French President Emmanuel Macron on Tuesday urged the European Union to reform itself to offer better protection for its citizens in a world troubled by wars and authoritarian regimes.

The 40-year-old leader, who wants to play a key role in the EU, outlined his vision for Europe’s future in a speech at the Strasbourg-based European Parliament.

Macron said democracy is the “best chance” for the EU to fight rising nationalism on the continent.

Macron called for an energetic campaign for the European Parliament election in May 2019 as the EU also deals with the challenges of Britain’s departure.

He told EU lawmakers that it’s important “to have a democratic, critical debate on what Europe is about.”

Macron said citizens “want a new project” for the EU that addresses their concerns and fears in a world in which allies such as the U.S. are turning their backs on multilateral trade and climate change pacts.

All EU countries, except Britain and Hungary, have agreed to seek the opinions of their citizens on the EU’s future through debates and online consultations by summer.

Macron will attend a debate on Europe in the eastern French town of Epinal later Tuesday.

The pro-European leader ruled out any enlargement of the EU until the 28-nation bloc is more deeply integrated and has undergone thorough reform. He said now isn’t the time to allow Western Balkans countries to join.

Juncker said Macron’s arrival in power in France has “given new hope” to the world’s biggest trading bloc. But he recalled that “Europe is an ensemble,” even with Britain set to leave the EU next year.

Macron will meet with German Chancellor Angela Merkel in Berlin on Thursday, as France and Germany aim to agree on proposals for EU reforms by June.

During Macron’s speech, some European lawmakers raised placards reading “Stop the war in Syria” and “Hands off Syria” to protest joint airstrikes Saturday by U.S., Britain and France on chemical weapons facilities in Syria.

Hitting back those who criticized the absence of a U.N. mandate for the airstrikes, Macron showed signs of anger.

“(We) are outraged each time by images we’ve seen of children, women who died of a chlorine attack,” he said, almost shouting. “Do we sit back? Do we defend rights by saying: rights are for us, principles are for us, and realities are for other? No! No!”

He said the U.S., France and Britain intervened in a “legitimate, multilateral framework” and stressed that the airstrikes specifically targeted three Syrian chemical weapon facilities “without any human life loss.”