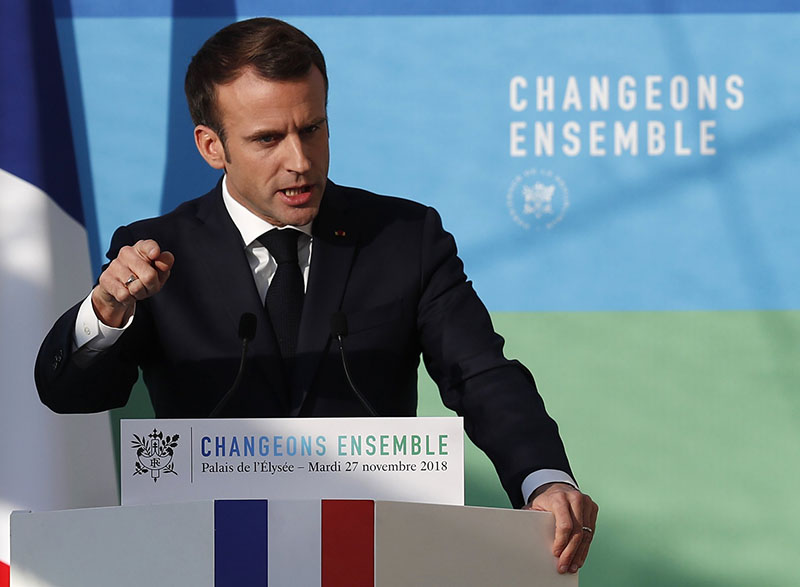 PARIS: French President Emmanuel Macron tried to defuse protests over rising fuel taxes by explaining on Tuesday his plans to wean the country off fossil fuels and promising to shift out of cheap nuclear energy more slowly.

His effort to win over protesters posing a challenge fell short. One of two representatives of the grassroots protest movement who met Tuesday night with the environment minister called for a new demonstration this Saturday on Paris’ Champs-Elysees. Last Saturday’s protest on the capital’s main avenue degenerated into violence with police resorting to tear gas and water cannons to regain control.

Macron stuck to small tax increases on gasoline and fuel that had prompted popular anger. But he proposed a mechanism to regularly review the tax when global oil prices are rising.

“I have a deep understanding of the expectations and frustrations, the resentment of citizens … Our duty is to bring a response,” Macron said in a speech at the presidential palace.

Macron insisted he will show “no weakness” toward troublemakers who used the protests to damage businesses and clash with police — including in the heart of Paris, on the famous Champs-Elysees avenue.

“I don’t confuse thugs with fellow citizens who want to send out a message. I feel understanding for these fellow citizens but I will not indulge those who want destruction and disorder,” he said.

In a bid to calm protesters in France, Macron also proposed a three-month consultation with associations and activist groups, including the so-called “yellow jackets” who have led protests, about how best to handle the rising energy costs. The environment minister met with two representatives of protesters on the president’s orders.

“There is a very strong need to be heard,” and “strong anger,” Francois de Rugy said after the Tuesday night meeting with two “yellow jackets,” who presented him with two pages of demands that, he said, “go way beyond” high fuel prices and Macron’s plan for a transition away from fossil fuels.

The protests since Nov. 17 triggered by hikes in diesel fuel taxes quickly grew to cover a wide array of issues including buying power and claims that the working class pays for the elite.

“They’re starting to worry about will happen (next) but not yet enough,” said Eric Drouet, one of the two people representing the protesters. The day left a feeling that “there isn’t a real will to improve people’s lot.”

Saturday protests on the Champs-Elysees “are maintained,” he said.

The grassroots movement without real leaders has made it hard for them to speak as one. However, departmental leaders will be chosen, the delegates said, counting on a meeting with a more highly-placed official.

Outlining France’s energy strategy for the next 30 years, Macron said the government will by 2035 shut down 14 nuclear reactors out of the 58 now running at 19 plants.

He said France would cap the amount of electricity it derives from nuclear plants at 50 percent by 2035. That’s a delay compared with the goal of 2025 set by his predecessor, Francois Hollande.

France depends more on nuclear energy than any other country, getting about three-quarters of its electricity from the plants. The delay on the cap would in theory help move France from fossil fuels, which Macron wants to do to fight global warming, and toward renewables without increasing the price of energy too much. Germany saw an increase in energy prices after it started a big push from nuclear to renewable energy.

Macron confirmed the first nuclear reactors to close will be those of Fessenheim, on the border with Germany, in a process that will start by 2020. Germany has long called for the plant to be shut down.

The state government of Baden-Wuerttemberg, on the German side of the Rhine river that separates the countries, has warned that if there were a large-scale incident at France’s oldest still operating nuclear plant it would be forced to evacuate the nearby city of Freiburg.

“It’s encouraging that President Macron has personally vouched for the closure of Fessenheim in the summer of 2020,” German Environment Minister Svenja Schulze said in a statement. “What’s important now is that actions follow these words as well.”

Greenpeace said in a statement that Tuesday’s measures “don’t help rapidly reduce greenhouse gas emissions” and “don’t accelerate the transition toward renewable energy. On the contrary, Emmanuel Macron continues to provide a blind support to the nuclear (sector).”