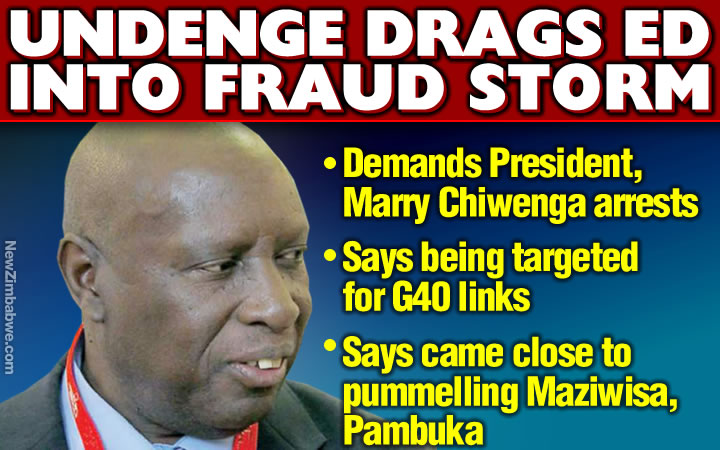 FRAUD accused former Energy Minister, Samuel Undenge went ballistic and demanded President Emmerson Mnangagwa’s arrest as he took to the dock Wednesday to defend claims of prejudicing the Zimbabwe Power Company (ZPC) of $12,000 during his tenure.

Undenge emotionally took it to the witness stand where he claimed he was being persecuted for belonging to the infamous G40 faction which was once fiercely opposed to Mnangagwa succeeding then President Robert Mugabe.

He called for Mnangagwa’s arrest saying the now State leader was the one who directed Fruitful Communications Company, which is at the centre of the fraud storm, to do public relations for ZPC without going to tender.

The ex-minister said his prosecution was a clear mockery to the country’s justice system considering that “corrupt individuals” were walking scot free while he was being pursued over $12,000.

“An official from the president’s office, Ndlukula testified in this court that Vice President’s wife, Marry Chiwenga was given a contract without going to tender, for a company which did not even exist.

“The company was even named when authorities decided to favour her with the deal because it never existed.

“It was a multimillion dollar deal but procedures were not followed; that is outright corruption,” he said.

“It also baffles me that owners of Fruitful Communications, Oscar Pambuka and Psychology Maziwisa clearly indicated that they were instructed to do PR work by the (now) President but the Zimbabwe Anti-Corruption Commission (ZACC) has never made any effort to record a statement from him.

“That is why I insist that am being persecuted for political reasons and I ask this court to acquit me because I did not commit any offence.”

Undenge said he was being targeted by people who were trying to please the President.

“I think the entire system, including the government, ZACC and National Prosecuting Authority want to portray that the anti-corruption campaign is a success; to say Mr president, see we have caged Dr Undenge over corruption while protecting corrupt people.

“We all know that Marange Diamonds’ $15 billion is missing butt nothing is being done to those accountable. In my case, we are talking of just $12 000. I am being used as a Guinea pig. My case is a mockery but I know for sure that justice will prevail,” said Undenge.

The ex-minister also told court that when ZACC called him for a statement, he was told that he was a State witness in a case against Zanu PF, MP Maziwisa and journalist Pambuka, owners of the company.

He said however, what happened when he went to ZACC offices leaves a lot to be desired.

“I was quite surprised by ZACC’s conduct. I went there to have my statement recorded as a witness but when the investigating officer was done, he went on to consult his bosses.

“I was made to wait for two hours only to be informed I was now a suspect.

“My understanding is that the IO (Investigating Officer) is the one who decides on whether to arrest a person or not but, in my case, his superiors decided. I then perceived this was all politically driven. I felt I was targeted,” he said.

Undenge said all witnesses who had been called to testify against him understood that there was nothing criminal about his conduct.

He further indicated that some witnesses who included ZPC boss, Noah Gwariro said they were forced to testify against him by ZACC investigations committee boss, Goodson Nguni.

Undenge confirmed he crafted the letter authorising Fruitful Communications to do PR work for ZPC since the owners told him that they were going to do the work for free.

He told court that the two had done PR for the ministry without being paid before.

He also told court that when he learnt that the two used his letter to defraud ZPC, he wanted to beat the culprits up but only stopped because he had no authority to do so.

He said the blame equally falls on the parastatals accounting officer because he never authorised any payment.

The ex-minister said he was also a victim of corruption since he was working day in towards good publicity for parastatals which fell under his ministry including ZPC since there so much bad publicity.

“There was drought, water levels in Kariba Dam had gone down resulting in excessive power cuts, things were bad and the public was ignorant about the situation. So, my ministry worked with all media companies in order to paint ZPC in good name,” he said.

Undenge’s case was postponed to a later date for continuation.