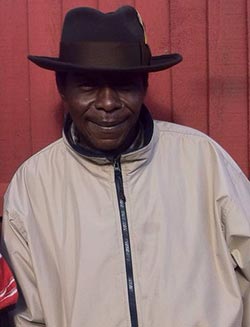 LEGENDARY South African Musician, Freddie Gwala arrived in London Thursday morning for his much-anticipated weekend shows in Leeds and Leicester.
Affectionately known by his legion of fans as Madamara after his hit song “Amadamara” of the early 1990s, Gwala appeared relaxed and was his usual bubbly self when met at the Heathrow Airport by his promoters.
Speaking to Newzimbabwe.com soon after touchdown, Madamara said he was excited to be back on the UK showbiz scene after a five year absence.
The Soweto-born vocalist said he missed his UK fans dearly and reserved special mention to his “loyal” Zimbabwean fans who packed the last shows he staged in UK.
Gwala was picked up at Heathrow airport by his promoter, Wellington Tengwa and headed for a day’s stop-over in Peterborough where he would spend the night meeting and socialising with fans.
He will then make the long trip to Leeds on Friday morning, in time for his first show before he stages another one in Leicester Saturday night.
Gwala promised to take his fans down memory lane with his huge catalogue of hits such as Madamara, Gumba Fire, Sis Rose and many more.
His musical career dates back to 1973 and has grown to become one of Southern Africa’s most popular musicians.
His uzumba beat, a fusion of soul and disco, has endeared him with his Zimbabwean fans.
Organisers of the grand shows have encouraged fans to come early to avoid disappointment.
Freddie Gwala – Amacriminal