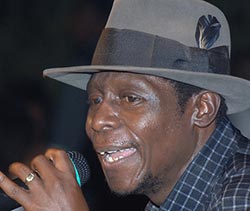 LEGENDARY South African music icon Freddie Gwala has signed up for two shows in the United Kingdom at the end of this month in Leeds and Leicester.
The Amadamara hit-maker has been conspicuously absent from the UK showbiz scene for some time, his last UK Tour was a one off event in Leicester in 2009 which was well attended.
Previously Gwala has shared the stage in UK with other legends like the late Brenda Fassie, Oliver Mtukudzi, Macheso and the Soul Brothers in memorable shows.
Affectionately known as Madamara after the release of his monster album of the same title, Freddie went on to build a successful brand under the Madamara label producing extremely successful albums including Shikisha Mahala, Gumba Fire, Sis Rose, Matshidiso and Freddie Mrembuli among others.
These became national anthems in Bulawayo shebeens, catapulting the musician to martyrdom especially in the city as well as around the country.
Event organiser, Wellington Tengwa, said all was set for the events with Freddie already having been issued a UK Visa to come and do what he does best, which is to entertain his fans.
The event comes after Valentine’s Day and an opportunity for fans to come out and share the spirit of love with a bigger fun loving crowd of fellow countrymen.
TOUR DETAILS
Tickets are £22.00 in advance
LEEDS
Venue: West Indian Centre
Date: Friday 28 February 2014
Times: 10pm – 4am
Address: 10 Laycock Place LS7 3AJ
LEICESTER
Venue: Leicester Street Life Night Club
Date: Saturday, 1st March 2014
Times: 10pm – 4am
Address: Dryden Street LE1 3QE
Freddie Gwala- Kipi Dhamani