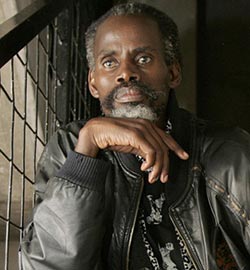 THAT citizens cannot enjoy democracy if they are ruled by an undemocratic party is the warning which got Cont Mhlanga’s play “Members” banned from theatre stages in Zimbabwe in 1985.
Owen Maseko’s art is equally provocative and political. A 2012 painting of a bespectacled man emerging from a television set with long outstretched arms is a depiction of the bad news of the killings in Matabeleland and Midlands by government forces in 1983, which President Robert Mugabe has described as a “moment of madness”.
Daring and bold define the works of Mhlanga and Maseko,  whose liberal yet dissenting artistic voices have made them personae non grata in Zimbabwe’s art circles.
Mhlanga and Maseko have been harassed, arrested and detained for criticising the government – but they have not stopped doing what they love.
Zimbabwe is widely perceived as having repressive laws on freedom of expression, association and the media. According to Amnesty International, the country is not walking the talk in practising human rights, guaranteed under a new Constitution, launched in August 2013.
The Criminal Law (Codification and Reform) Act of 2005 has been used to silence critics. The law was put to test in October 2013 when the country’s Constitutional Court ruled that sections were unconstitutional and should be scrapped.
In his ruling, Deputy Chief Justice Luke Malaba criticised government prosecutors for abusing the law, saying the country’s National Prosecuting Authority (NPA) should not be “prosecuting matters in which statements were uttered in drinking halls and other social places, as the pursuit of such frivolous matters only served to bring disrespect on the Office of the President.”
Persecution
While civil society organisations and lawyers commend the Constitutional Court for taking a big step in securing freedom of expression and the rule of law, Mhlanga and Maseko have suffered persecution, humiliation and isolation.
“Once you have a government that bans you as an individual and people do not see your work but see you as a controversial and problematic figure, you do not get far,” Mhlanga, the founder and artistic director of the Amakhosi Cultural Centre and performing arts academy, told IPS.
“It is not wrong to be critical because it helps everyone but there is a misconception that when you talk about rule of law in Zimbabwe you are referring to regime change. That is the biggest misconception there is because we are dealing with people who only understand their political positions and not the laws, especially under our new Constitution.”Advertisement

Mhlanga describes his work as one story of governance and transparency, and his plays offer a social commentary on politics, corruption, human rights abuses, dictatorship and dispossession. A number have been banned from the stage, earning him a reputation for not shying away from controversy.
The 1983 satirical play “Members” was prophetic of Zimbabwe’s current politics. Infighting has rocked the ruling Zanu PF as separate camps jockey for a candidate to succeed Mugabe, who has indicated that he will serve his current five-year term of office to 2018.
Opposition parties who fared badly in the July 2013 elections are now more divided than they were in the 2008 elections.
Mhlanga’s play “Nansi Le Ndoda”, which toured Botswana in 1985, introduced him to the national and international stage with its didactic message about corruption.
“Stitsha” mirrored the controversial land policies that have divided Zimbabweans today, with claims that reforms have led to poor agricultural productivity and food insecurity.
“Workshop Negative” highlighted the conflict between rich and poor as a result of political patronage. It was banned.
“I write plays because I am stubborn about issues, not because the plays are appreciated,” said Mhlanga, lamenting that because of his work the government was not comfortable supporting any projects and graduates from his academy.
No government support
“I am affected because this persecution slows down new thoughts I would like to bring to society because society is developed by thoughts. Thought leadership does not come from a group of people but it can come from simple individuals as I write to advise and help correct what I find wrong in our society.”
Maseko has suffered personally and professionally since his Gukurahundi Exhibition held at the National Gallery in Bulawayo in 2009 was shut down by the police after it premiered.
Today the section of the gallery housing the exhibition is a crime scene despite the Constitutional Court ruling that Maseko’s arrest was unconstitutional.
“The freedom to express one-self does not come free because I have paid for it with my work,” Maseko told IPS at his home studio in Bulawayo.
“While I have been able to do international exhibitions, I have not been able to function in Zimbabwe as no one wants to work with me or be associated with me.”
Maseko laments that his family lives in worry that he might be arrested again to suffer a worse fate. The minister of defence, who in November 2013 was summoned by the Constitutional Court to justify Maseko’s prosecution, has since appealed the ruling.
“My celebration of being a free man has been short-lived and I do not know when this matter will be heard. It could be next year or never,” said Maseko.
“Art appreciation is important and critical. If a lot of people start appreciating art then all the laws about the freedom of expression might possibly be challenged and changed.”
The Media Monitoring Project Zimbabwe (MMPZ) has urged the government to immediately repeal the remaining laws that affect the right to freedom of expression, association and assembly, arguing they violate regional and international norms.
Zimbabwe Lawyers for Human Rights (ZLHR) said banning Maseko’s work has very troubling implications for national healing, reconciliation and integration in Zimbabwe.
“It is too early for us to say that the government has embraced democratic principles as they will have by now aligned the laws in line with the provisions in the new constitution, ” ZLHR spokesperson Kumbirai Mafunda told IPS.
“We expect this government to adopt modern laws and model standards that inform modern democratic societies. Zimbabweans must not be persecuted and prosecuted for free expression.”
Citing the Criminal Law (Codification and Reform) Act and the Public Order and Security Act as some of the laws used in the past to deny people their rights to freedom expression, association and peaceful assembly, Amnesty International says in its November 2013 report that Zimbabwe should improve its poor human rights record.
“The new Constitution offers a golden opportunity for the government to begin to right the wrongs of the past, to deliver justice for its people and to allow freedom of expression,” said Noel Kututwa, Amnesty International’s deputy director for Southern Africa.