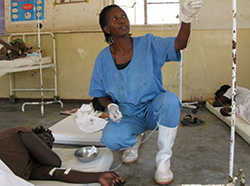 IN a move set to be the first of its kind for the Zim-dancehall, Freeman ‘HKD’ Boss will stage his first shows in China this month.
He becomes the first Zim-dancehall artiste to perform in this Asian country, indicating the genre is fast taking on a global scope.
Announcing the news on his official HKD Boss Facebook fan-page, Freeman – the Dancehall Doctor as he is popularly known in the industry – said he would be performing in China on October 9 and 10.
The first show will be staged on Friday October 9 at 9 Club, Hangzhou.
The following day Freeman rounds up his tour with a performance at Soul Club, where he will be supported by some of Zimbabwe’s finest deejays in DJ Fyn, Phill and Painkilla. The concert is being hosted by MC Boss D.
The Joina City hit maker continues to push the boundaries since breaking onto the local music scene, and has become a regular performer in the United Kingdom where he delivered another concert last week.
In an interview with NewZimbabwe.com, Freeman could not hide his excitement about the Far East tour and said this was only the beginning of bigger trips on his schedule.
“I have come far with this music business and what makes this tour special is that, I become the first Zim-dancehall artiste to tack my act to China,” he said.
“This is one of the Asian countries that have become synonymous with our genre perhaps because of the numbers of Zimbabweans living in China.
“Both countries (China and Zimbabwe) share good relations and there is absolutely no reason not to perform for our Chinese friends and music lovers.”
Freeman continues to churn out hits on various riddims produced by the likes of Dj Phantan and producer, Levels from Chillspot.
He is steadily maintaining his status as one of the pioneers of Zimdancehall, a genre that many were sceptical about when it first exploded on the local music scene.
Meanwhile, one other artists who is also reportedly in demand and likely to follow in the Doctor’s footsteps is Soul Jah Love whose music continues to enjoy commendable airplay in various clubs in China.
Freeman: Munyai wangu Shinso