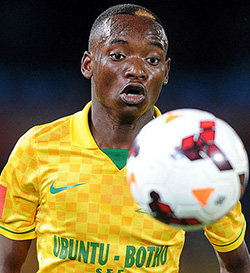 MAMELODI Sundowns Zimbabwean midfielder, Khama Billiat, is being tracked by French giants, Lille OSC with a view to signing him on.
According to Soccer Laduma, the talented Zimbabwean forward is being closely monitored by the French side which watched him in action in Zambia in one of Sundowns’ friendly games against Zesco United recently.
Christophe Jeannot, who is a scout from Lille, was spotted watching Billiat play against the Zambian club.
The Zimbabwean forward is back to his best and enjoying his football again, following the lengthy injury layoff which hampered his progress earlier this season.
The player’s performances have im­proved greatly, much to the delight of Pitso Mosimane and his technical team at Sundowns.
Billiat was the best player on the field against Zesco in Downs’ 2-0 win.
The 24-year-old is believed to have im­pressed Jeannot and it is highly likely he would to go to the French Ligue 1 outfit in the next transfer window.
Jeannot could not divulge any infor­mation on their assessment of Billiat who was the arguably the best player on the day, but chose to speak about South African foot­ball after watching the Mamelodi Sundowns and Zesco game.
Young South African striker, Lebo Mothiba, is currently on the books of Lille. The club is renowned for foot­ball development around the world.
Chelsea midfielder, Eden Hazard, came through the club’s academy. Hazard spent about two years at Lille’s academy before his promo­tion to the senior team.Advertisement