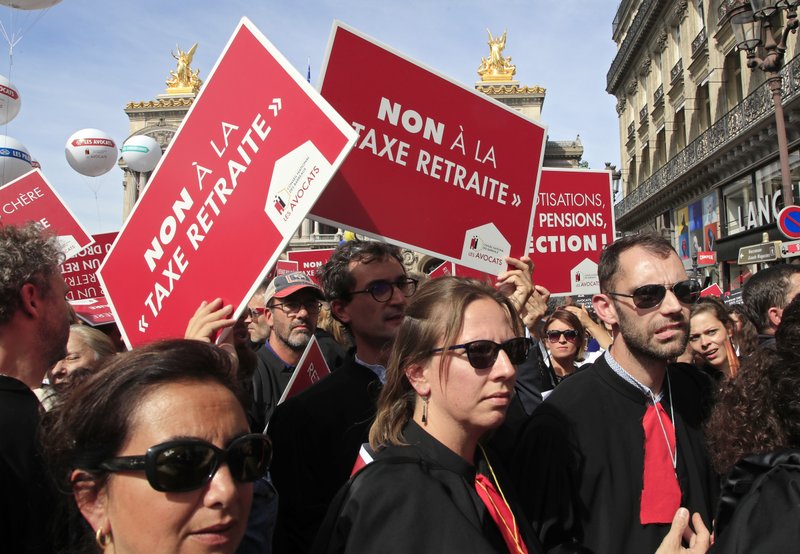 Thousands of French professionals, including lawyers and doctors, took to the streets of Paris Monday in the latest protest against the government’s planned pension changes.

The protest saw lawyers, doctors, nurses and others in regulated professions vent their displeasure at the proposed changes that President Emmanuel Macron’s government says will simplify France’s convoluted pensions system.

The government has promised the legal retirement age of 62 won’t change, but new conditions may encourage people to work longer.

A large majority of those protesting Monday were lawyers as the National Bar Council, which initiated the demonstration, claims the proposed changes will double the taxes its members will pay.

Wearing their black robes, they marched in Paris’ central streets singing “no, no, no to the Macron reform,” some brandishing posters writing “no to the pension tax.”

There’s growing opposition to the government’s proposals, which will see 42 different retirement systems linked to certain jobs, replaced by new arrangements that will mean those becoming of pensionable age operate under the same rules.

On Friday, Paris endured the biggest disruption to its public transport since 2007 as unions went on strike.

Pilots and air crew, who are not regulated by the state but have special pension arrangements which allow them to retire early, joined the protest. Air France has not warned of any flight disruptions.

Most lawyers across France were on strike and decided not to plead any cases and asked for trials to be postponed.

The demonstration took place as the government is starting a three-month consultation with unions, employers’ groups and professional organizations. The pension changes will be formally presented and debated in parliament next year.

Several unions are planning demonstrations on Sept. 21 and 24 in Paris.