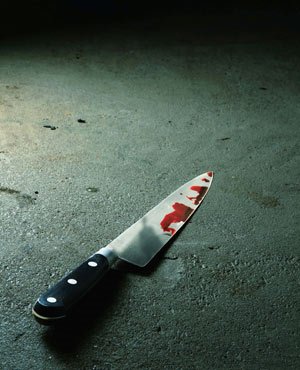 A Frenchman who murdered his friend and cut up his body said on Wednesday he was driven to kill after being refused money for drugs, a prosecutor said.

The grisly crime took place in the central town of Issoire, where a plumber was called out last week to a hair salon after a customer reported that the toilets were blocked.

On opening a trap door leading to a drain the plumber discovered several pieces of flesh, which forensic tests showed as coming from the same body.

The investigation soon led to the apartment above the hair salon, where police found blood on the walls and curtains, a circular saw… and a brain and human liver in the freezer.

They then identified a man suspected of being the victim and visited his home, where they found bloodstains.

Footage from the town’s CCTV cameras showed the 36-year-old suspect boarding a train on January 10 after throwing three large bags containing bloodied garments into a bin.

An unemployed drug addict with a string of drugs and theft convictions, he was arrested on his return to Issoire a day later.

The public prosecutor for the central Clermont-Ferrand region, Eric Maillaud, said the suspect confessed on Wednesday to killing his 45-year-old friend “because he refused to give him a large some of money to buy drugs.”

A schizophrenic who had been hospitalized twice with mental health issues, he had stopped taking his medication, the prosecutor’s office said. He has not yet been named.

The victim, who also an addict and has also not yet been named by the authorities, had recently inherited a large sum of money, investigators said.