The once feared military boss now ensconced in the country’s second most powerful government job had also blocked his estranged wife’s access to the squabbling couple’s three minor children.

This was after Marry had just been granted bail after spending weeks languishing in remand prison for allegedly attempting to kill the controversial top politician and other corruption related offences.

In granting her bail and as part of the conditions, court had ordered she returns to reside at the family’s Borrowdale home.

Chiwenga appeared interfering with the order when he barred his wife from accessing the same home she had been ordered to continue residing in.

In a ruling following a court application filed against the VP, Justice Banda said Chiwenga’s actions were a cause for concern considering his social standing and his inclusion of armed forces in a simple matrimonial dispute.

Banda reminded Chiwenga that he was not different from any Zimbabwe except that he has a higher standing in society.

“It is a fundamental rule of our law that no one is above the law and that no one is allowed to resort to self-help without recourse to the remedies provided in the law,” said the judge.

“I note from the founding affidavit that the applicant resided at number 614 Nick Price Drive, Borrowdale Brooke, Borrowdale Harare prior to her removal from the premises when she was arrested by members of the Zimbabwe Anti-Corruption Commission (Zacc). The respondent had not resided at the said premises for a period of more than four months prior to the arrest.

“The respondent may not wish to reside with the applicant but in the absence of a court order, he has no right to bar her from entering or residing at the erstwhile matrimonial home.”

He further slated Chiwenga’s actions reminding the country’s second in charge he was still an ordinary human being.

“The conduct of the respondent has the potential to render the applicant destitute, frustrate her compliance with bail conditions and place her in serious jeopardy and bring the standing of the status of the rule of law in Zimbabwe into serious disrepute.

“It must not be forgotten that the respondent is no ordinary citizen and his conduct is particularly objectionable as he has taken an oath to uphold the laws of Zimbabwe.” 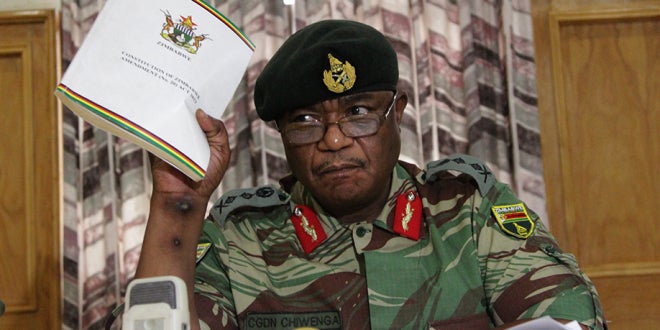 Stickler for the constitution?…then Zimbabwe Defence Forces commander Chiwenga a day before he overthrew then President Robert Mugabe November 2017

The judge said it was frightening and taboo that a whole Vice President would rope in soldiers to assist him fight his matrimonial issues.

“Whatever the reasons are, I do not agree that a spouse may be removed from the matrimonial home outside the parameters of the law. To my mind, she may move out of such a home either by her consent or after the conclusion of due process.

“She cannot be refused entrance to the matrimonial home by the members of the military. In fact, it is unacceptable and anathema to the constitutional values of this jurisdiction that the military may be used to settle a matrimonial dispute.

“This is frightening and undermines the values inherent in our constitution which the rule of law, supremacy of the Constitution, gender equality, fundamental human rights and freedoms and good governance.

“What happened to the applicant must be cause of fear and concern to all law abiding citizens wherever they are and their station in life.”

Banda said it was in such situations that court must step in without fear or favour to defend the Constitution and to defend the rule of law.

The judge said Marry has discharged the onus on her of showing on a balance of probabilities that an act of spoliation was committed against her in respect of number 614 Nick Price Drive Borrowdale Brooke, Borrowdale Harare.

He ruled that she has shown a real right entitling her to a final order of spoliation.

Banda also said the issue of who owns what does not apply in this case.