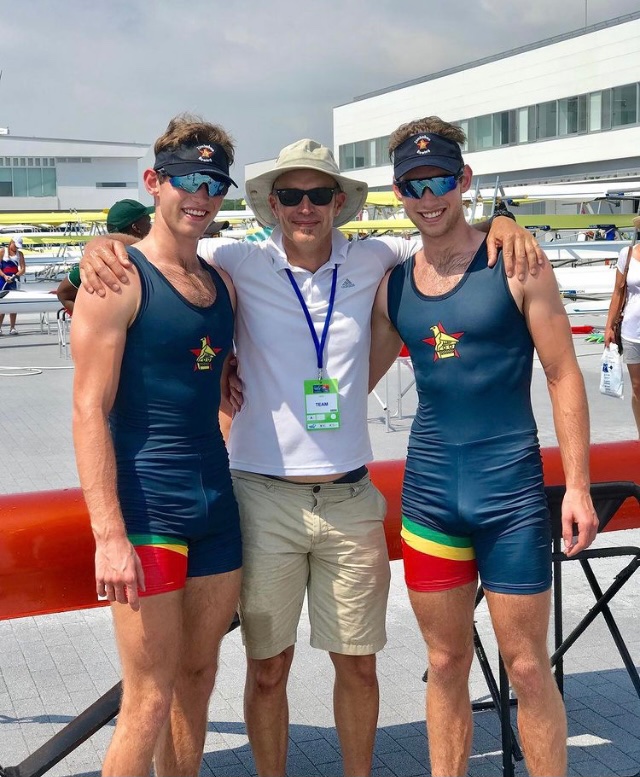 The Plunket twins pose with coach Ernie Steenkamp of Hilton College, their high school in South Africa, at the 2019 World Championships in Tokyo.
Spread This News

FOR twin brothers Rory and Pat Plunket, the short walk between Mather House and Winthrop House might be the farthest apart they have ever been.

“We’ve never spent more than a week or two weeks away from each other, which is really weird to think about over 20 years,” Pat said.

As sophomore heavyweight rowers for the Harvard Crimson, and as international students from Zimbabwe, the Plunket twins have formed a special bond.

Growing up in Zimbabwe, before high school, the Plunkets never really got exposed to rowing, but their natural surroundings imbued them with an appreciation for nature and for sports. They spent years of their childhood running around the local forests, hiking in the mountains, camping, and fishing.

“We grew up on a forestry estate in the eastern highlands of Zimbabwe, very remote, bordering Mozambique, near a local village called Chimanimani,” Rory said.

“It was very organic and very outdoors,” Pat explained.

Their family farm grows avocados and macadamia nuts, which are exported to countries like China and the Netherlands.

Despite their sporty background, until high school, the Plunkets had never rowed before. One summer, on holiday from Hilton College, their boarding school in South Africa, the Plunkets decided to try their hand at rowing. Their father had actually rowed during his secondary school years in England, although “not very well” according to Rory. Despite a rocky start, the twins continued to work with their coach, Ernie Steenkamp, to improve their craft.

“Our coach was the ex-national junior team coach in South Africa, and he really saw something good in us, and so we carried on quite seriously,” Pat said.

However, rowing is not a particularly popular or well-resourced sport in Zimbabwe, and the Plunkets did not have the best resources when they tried to hone their skills at home. Their main practice area was Mazowe Lake, located about 45 minutes north of Zimbabwe’s capital city Harare.

“We used to have very limited resources, boats, and sheds with corrugated iron, all locked up with this big padlock,” Rory said. “We rowed there during our holidays, and I think the team was made up of four people — the two of us, one other guy, and a girl,” Rory explained.

Their competition during the off-season was further complicated by long travel itineraries and the distance between schools with rowing programs in Zimbabwe. At boarding school in South Africa, the Plunkets ran into a similar problem in their training and competition.

“Our school was the only school that rowed within a seven-hour radius, so we were super isolated. We were the smallest sports team at school. It started off with a bunch of us, and then by the end of our time, it was only my brother and I,” Pat said.

Despite the small size of the team and the isolation of their school, the Plunkets found a great mentor in Steenkamp at their boarding school. “He was this old Afrikaans man, and pretty strict,” Pat said.

Considering the amount of time they spent together throughout high school, they quickly developed a strong relationship. To get to their competitions in the capital city of Pretoria, the Plunkets and Steenkamp regularly drove seven hours with a big boat trailer attached to the back of their car.

“Me and Patrick spent the majority of our years in high school, nearly every weekend, in this old Land Cruiser that was probably 25 years old. It was the most uncomfortable thing, and we just spent hours and hours in it,” Rory said.

“He was kind of like our mentor since we spent so much time with him,” said Pat, and the twins still keep in touch with Steenkamp regularly.

Since the outset of their careers, the Plunkets have come a long way, rowing at the 2019 World Championships in Tokyo, even reaching a final there. The Plunkets, since coming to Harvard, have rowed in the heavyweight class, although they are on the smaller side for that weight class.

While the Plunkets went from inexperienced to international competitors in just a few short years, even still, the training regimen for the first semester on the heavyweight team has been a step up.

“We’re on the water twice Monday, once Tuesday, once Thursday, twice Friday,” with a final session on Saturday morning, according to Rory.

Outside of those coach-organised practices on the water, it is up to the athletes to decide how to train, whether that means putting in an extra session in the weight room or more time on the Ergo bike.

“Everyone here is very good. It’s pretty ridiculous the depth of the club, and so sometimes, it’ll take a bit longer to get the boat going, but usually, for the most part, it’s a very high standard.”

“Last week, we had a Lord of the Rings theme, and our boat was the wizards. It’s usually the guys who are a little bit more technical, and maybe a bit small, but we just seem to click,” said Rory, adding that the heavyweight squad can have fun and keep things light-hearted even amidst the intense training.

Coming from an environment where rowing teams were small and where the nearest competition was seven hours away, Pat and Rory have come to love the camaraderie and competitive spirit that the rowing club provides — a big change from solo rides with Steenkamp to regattas.

“Everyone is so competitive, and they always want the best for their teammate, and we make sure to do stuff outside of rowing together,” Pat said.

Since the Plunkets are international students who missed their first year on campus, the rowing team has taken on added significance for the brothers, providing a welcoming community since day one on campus.

“Everyone brings different things, and everyone is just so happy to be here,” Pat noted. “It’s all like-minded people who want to work hard, but they want to have a good time at the same time.”

For Rory, after he graduates from Harvard, he is looking to work in London, or potentially back in Africa, in a place like Kenya. For Pat, he is considering working in London or in New York, where the Plunkets have family. They also have dreamt about attending business school at the University of Oxford in the United Kingdom.

As far as staying involved in rowing, both Pat and Rory are just focused on the present.

“I’d love to have a really good time with my rowing [and] take it very seriously while I’m here,” Rory said.

In the future, looking to continue with the athletic knack, the Plunkets envision being involved in CrossFit training programs, as well as local rowing clubs.

“When we first got into Harvard, I think every second comment was ‘Oh, it’s the Winklevosses again,’’” Rory joked.

While they do not resent the comparison, they also look forward to forging their own paths.

“But I definitely want to be known as the Plunkets at some point.”