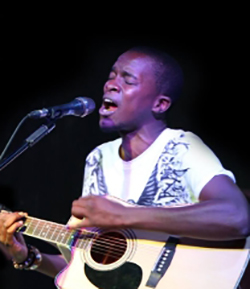 FROM recording his first track in a friend’s kitchen in 2008, Zimbabwean musician, Stewart Gatsi has made a steady rise in his career and taken Asia by storm, holding shows in Ho Chi Minh City, Muine Vung Tau (Vietnam) Hong Kong and Singapore.
The Harare-born musician, who recorded his first album, the Telling Truth, in 2010, is expected to drop another six-track banger Songs on My Bike and has already launched the first single called Well on My Way.
“I realized that music was something I could take seriously in 2008,” Gatsi told NewZimbabwe.com
“I was encouraged by Simba Tagz, who produced my first ever recording The Walls. We recorded the entire track with very little equipment in his kitchen.
“Chris Van (front man for Dividing the Element) also played a key role in helping me understand the deeper elements of vocals and guitar, when it comes to music.”
Gatsi said he did not set out to focus on a particular genre, as he loved to blend different elements from different genres.
“I do this because I think that good music shines through regardless of genre, but if I had to put myself in a box I’d call my music ‘Alternative’.”
Gatsi said he was raised in music family as he, together with his brother and sister grew up singing along and dancing to music played by Peter Johns on the then Radio three.
“From an early age, I’ve also always written poetry, but never had an interest in sharing it. One day I started singing to my poetry, and it stuck … from then on, I started writing and haven’t stopped since.
“I gradually started getting into the live music scene and performed at a few private shows in Harare and Cape Town.
“At the moment, I’m currently performing in Ho Chi Minh City, Vietnam, and recently toured Muine, Vung Tau (Vietnam) Hong Kong, and Singapore.”

He said learnt to play the guitar out of frustration when his guitarist sometimes would not turn up for shows forcing him to cancel some events.
“So, I bought a guitar without knowing not a single thing about how to play… and have somehow with the help of watching tutorials on YouTube, going to open mic sessions, and learning from friends like ‘The-Future’ Tatenda Kevin, been able to hold my own for a full two-hour acoustic show.Advertisement

“I do have a long way to go though, before I call myself a good guitarist.”
The youthful musician said although he admired several musicians, his greatest inspiration was his neighbour who used to own a box guitar made from an empty oil tin.
“I remember sitting there for hours just watching him play his guitar … he is my number one inspiration. Besides him … Oliver Mtukudzi helps me connect with home every time I hear one of his songs.
“Linkin Park strikes a deep chord within me. Salif Keita, has beautiful haunting numbers. Chuck Berry is an absolute legend. Tracy Chapman can turn sorrow into something tremendously beautiful.
“The Scatmann led me to appreciate Busta Rhymes. Adele is also pretty awesome too … not as cool as Steve Makoni though. I have a deep appreciation for good music regardless of genre, so I find inspiration from many sources.”
Gatsi initially left Zimbabwe going to the USA for studies but later realised he could travel the world with his music as it played a big role in his life.