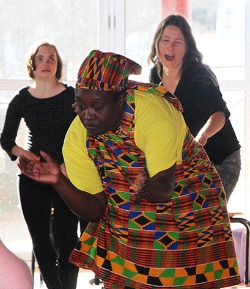 *This article is taken from CBCNews
CANADA: It might not seem like an obvious pairing, but the interest in African dance is so high in Corner Brook that a full-time studio is soon opening up.
“We are more similar than we are different, the culture here … in terms of the music, we express ourselves through music and dance,” says Mufaro Chakabuda, who is originally from Zimbabwe.
She is the founder and CEO of the Maritime Centre for African Dance, which she launched in 2005 with just $19.50 and “a lot of guts and a dream.”
Now it boasts 60 facilitators across the country, with camps offered across Canada, the United States and Zimbabwe.
Chakabuda said she started coming to Corner Brook four years ago and working with different schools.
“What I really noticed was that folks were interested but they were hesitant because they weren’t really sure it was something they could do,” she said.
“[They wondered] ‘Is it only for African people? Is it only for people of African descent?'”

Chakabuda said setting up shop in this province was something she always wanted to do and people began to inquire when she would be coming back.
The members of the Maritime Centre for African Dance who are helping to get the Corner Brook operation off the ground live in the city, said Chakabuda.
“We like to add to the diversity in Corner Brook as well, so that’s the reason why.”
Chakabuda noted the studio will develop books and DVDs, too.
While Corner Brook will be the home base for camps and workshops, she said there will also be a mobile business offered to clients along the west coast of Newfoundland.
Performed for Obama
The Maritime Centre for African Dance performed at then-U.S. President Barack Obama’s African Inaugural Ball in Washington, D.C., in 2009.
“It was absolutely amazing,” Chakabuda said.
It was a powerful performance for her — and not just because of who was in attendance.
“My initial knee-jerk reaction was, ‘I’m done my degree [at Dalhousie University], I’m leaving this cold, later Canada,'” Chakabuda said.Advertisement

“[The performance] actually reaffirmed for me that we were doing what we were supposed to be doing.”
It was after that Washington performance that the Maritime Centre for African Dance started to expand — and that continues today.
“We teach education through the arts,” Chakabuda said.