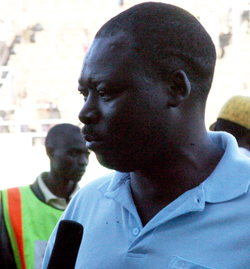 NOMADIC coach Moses Chunga has quit Castle Premiership side Buffaloes citing poor working conditions.
Chunga, who has coached among other teams Dynamos, Caps United, Black Rhinos, Gunners and Hackney, took over at Buffaloes during the middle of last season.
He replaced Luke Masomere who went to How Mine.
However, it is understood that Chunga is owed more than $1,500 in salary arrears and was not happy with the executive’s decision to stop him from engaging civilian players.
The team is owned by the army and the executive wanted army players only who could draw a salary from the Government rather than civilians, whom they would have to pay.
In the two recent friendlies they played against Harare City and newly promoted Dongo Sawmills, the players were reportedly not given allowances.
While the Buffaloes management said they were not aware that Chunga had quit, the former Warriors midfielder relayed the message to the players at Tuesday morning’s training session at Mutare Showgrounds.
He is now likely to be replaced by his deputy, Joseph Takaringofa.Advertisement