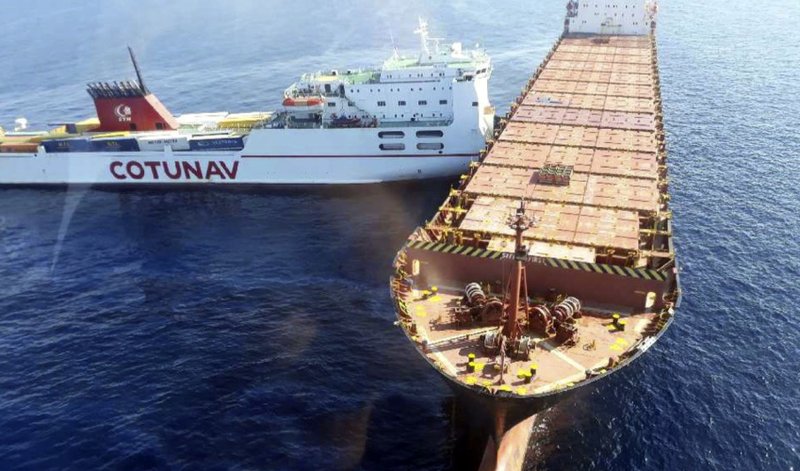 PARIS: Two merchant ships collided north of the French island of Corsica on Sunday, causing a 4-kilometer (2.4 mile) fuel spill in the Mediterranean Sea that French and Italian authorities are working to contain.

No one was injured in Sunday’s collision, but it smashed a hole of several meters (yards) long in the hull of one of the ships, causing the spill, according to a statement from the regional French maritime authority.

The spill created a trail of pollution 4 kilometres long and several hundred meters wide, heading away from Corsica to the northwest, toward the French and Italian mainland, the statement said.

A spokesman for the regional French maritime authority described the material as “propulsion fuel” without elaborating.

Two French ships were sent to the area and specialists were helicoptered in. The Italian coast guard also sent an aircraft to monitor the operation and three ships to help contain the spill.

Cleanup work will resume work Monday morning, when experts will decide how to safely separate the ships, the French statement said.

The maritime authority said that a Tunisia-registered ship carrying trucks with merchandise rammed into Cyprus-registered container ship CSL Virginia on Sunday morning. A photo released by the French navy showed the bow of the Tunisian ship smashed up against the side of the other ship.

A spokesman for the maritime authority said a lack of wind in the area, 28 kilometres from the Corsican coast, gives authorities hope the spill can be contained quickly. He was not authorised to be publicly named.

The collision occurred in French waters, but the cleanup operation is part of a joint pact among France, Italy and Monaco to combat pollution accidents in the Mediterranean.

The Corsican regional police administration said an investigation is under way into the cause of the collision.