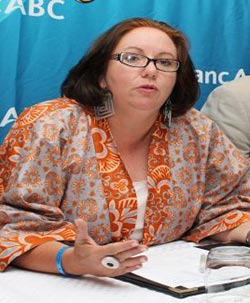 Below is the full statement issued by Wednesday by the Harare international Festival of the Arts (HIFA) on the deportation by government officials of South Africa-based Afro-pop group Freshlyground which was billed to headline the just ended festival in Harare …
HIFA would like to again state its official position on the above matter. HIFA chose Freshlyground on the basis of their artistic credentials and their accomplishments which have been recognised the world over. HIFA has not received any reason for the denial of entry of the Freshlyground. Other government ministries and departments are also surprised at the denial of entry.
HIFA is, however, confident of government departments’ capacity for common sense and professionalism which HIFA has always experienced from these departments and HIFA is also confident such common sense and professionalism will set in.
The application was valid and HIFA will again engage the relevant departments to bring Freshlyground for a show in the immediate future. It must be noted that every other act whose application was submitted at the same time was permitted entry. There, therefore, cannot be a question of ‘bungling’. Below is the order of events pertaining to Freshlyground clearance as followed by HIFA:

All relevant ministries indicated their support of the group’s coming, hence the involvement of those ministries that have been quoted in the public space.
It must be borne in mind that someone bringing in a show cannot even make payment to ZIMRA, Board of Censors or the Department of Immigration without giving the performance contract to NAC and getting approval from NAC. All of this was done (many weeks in advance) and everyone was aware of the group’s coming.Advertisement

Every year, HIFA meets all line departments and ministries with whom HIFA works. Programmes are then given well in advance. Clarification had been sought as to whether anyone had any problem with any act coming – no one had a problem with any group. If it had been made clear that the group was not welcome at all, then why did every department accept payment for the group?
It is not unwarranted to expect that the group would be permitted entry despite the Department of Immigration not responding to the appeal. A case in point is that two individuals who were part of the group (including Keith Farquharson) were permitted entry. His is one of the rejections that had been appealed against but not responded to.
Due to the size of the contingents being brought in for HIFA, it is nothing new for TEPs to be issued in the middle of the Festival. The Department of Immigration always has the full list of artists coming weeks before the Festival but for logistical reasons, it is not unusual for the department to issue the TEPs on a continual, rolling basis. It is therefore not unusual to have TEPs (or answers to appeals) issued well into the Festival.
Those artists from abroad being quoted in some sections of the media as having been banned from certain countries either have criminal records or are informed ahead of time why they are not being permitted into those particular countries. Neither of these two phenomena apply in this instance.
HIFA will again engage the relevant departments so as to bring Freshlyground into the country for a show shortly. HIFA trusts the capacity of these departments to exhibit the same common sense and professionalism they have exhibited in the past.
HIFA encourages the media to be factual and fair in reports on the matter should there be any.