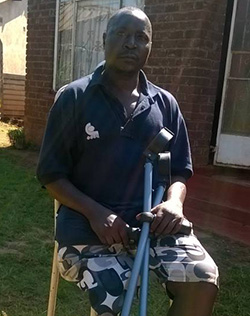 *Those who want to help can phone Tedious’ wife Patience Moyo on +263 772 908 118
NGWENYA Brothers leader, Tedious Matsito, has fallen on hard times and is seeking almost US$10,000 to enable him to go for medical treatment in South Africa.
The Sungura musician suffered a stroke during a tour of South Africa last December which has rendered him unable to speak properly – let alone sing – and is supposed to be on speech therapy.
Matsito, 47, whose right leg was amputated following a road accident in 2008, is supposed to go back to South Africa for specialised treatment to regain his voice, which has been his only source of livelihood for decades.
Ngwenya Brothers have 22 albums to their name.
“He suffered a stroke last December in South Africa where he had gone on a three-month contract which was supposed to end in March this year,” Matsito’s nephew, Collin Siwali told NewZimbabwe.com in an interview at the Matsito residence in Harare’s Kuwadzana 5.
“He is currently on speech therapy here but is supposed to go back to South Africa for specialised treatment.”