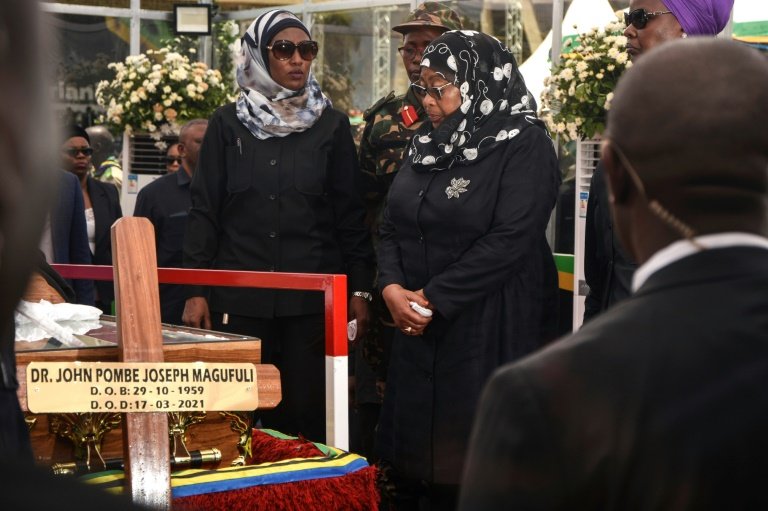 Mourners line the streets and gather at a church in Dar es Salaam to remember Tanzania’s late president John Magufuli, before he is transported to the Uhuru National Stadium where he will lie in state.

Magufuli died at the age of 61 on Wednesday. He will be buried in his ancestral home next week, after various events in a number of cities where mourners can come to pay their respects.

Tanzanians thronged roadsides to catch a glimpse of the convoy that moved the casket draped in Tanzania’s national flag and carrying Magufuli’s remains to the church. Some could be heard wailing in sorrow.

Magufuli will be buried on March 25 but his body will remain here in the church until March 21 before being bid farewell.

On March 22, the body of the late leader will be moved to Dodoma for public viewing before being moved to Mwanza on March 23.

On the same day, the body will be moved to his Chato town where his constituents will have a chance to view the body.

On March 24, family members and all international and invited guests will have a chance to pay last respects before the burial day on March 25.

Flags are flying at half-mast as the country began a 14-day mourning period after Vice President Samia Suluhu Hassan announced Magufuli had died Wednesday of a “heart condition” in a hospital in Dar es Salaam.

Under Tanzania’s constitution, Hassan was sworn in Friday as the country’s first female president and will finish Magufuli’s five-year term, ruling until 2025.

The government had previously denied Magufuli was ill as pressure mounted to explain his almost three-week absence from public view, which sparked rumours he was seeking treatment abroad for coronavirus.

Several people were arrested this week for spreading rumours over his ill-health on social media.

As condolences poured in from abroad, main opposition leader Tundu Lissu, shot 16 times in a 2017 assassination attempt and exiled in Belgium, described Magufuli’s death as “poetic justice”, insisting his sources said he had succumbed to Covid-19 a week ago.

“Magufuli died of corona. That is one. Number two, Magufuli did not die this evening,” he told Kenya’s KTN News.

“What should I say? It is poetic justice. President Magufuli defied the world on the struggle against corona… He defied science… And what has happened, happened. He went down with corona.”

According to Samia Hassan, Tanzania’s new leader, Magufuli died on March 17 after a 10-year battle to heart complications and will be laid to rest after a church service at Chato Catholic Church.

Samia took over as the president after she was sworn-in a few minutes after 10am on Friday.