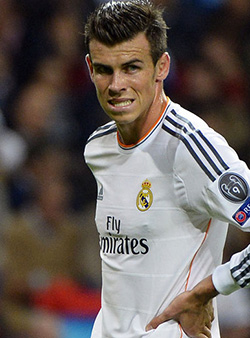 NEARLY three-quarters of Real Madrid fans are calling for Gareth Bale to be dropped from the European champions’ starting XI.
Spanish newspaper AS ran a poll asking over 8,500 fans, “Would you keep Bale in Madrid’s starting line-up?”, with 68.3% demanding that Bale be dropped.
The Welshman has been under immense pressure of late after a string of lacklustre performances, although with Real Madrid’s form dipping badly since the winter break, he is far from alone in playing poorly.
He appeared to have stopped the rot with a match-winning brace against Levante on 15th March.
But an anonymous performance in Sunday night’s 2-1 defeat against Barcelona in the Clasico got the fans booing once more – and even induced a couple of fans to lie in wait to abuse him after his return to Madrid.
AS points out that Bale was unlucky to have a goal disallowed in the first half at Camp Nou, but pointed out that he had the worst passing accuracy of any player on the pitch – just 58.6% – and noting that he didn’t even step foot in the Barcelona box during the entire second half.
Another Spanish publication, Marca, said on Monday that “Real Madrid paid for a supercar but got a bicycle” when they signed Bale.
And that sentiment seems to be more and more widespread.
Manager Carlo Ancelotti and club president Florentino Perez have consistently backed the former Tottenham star, but if he continues to produce poor performances they will surely have little choice but to bench him.Advertisement