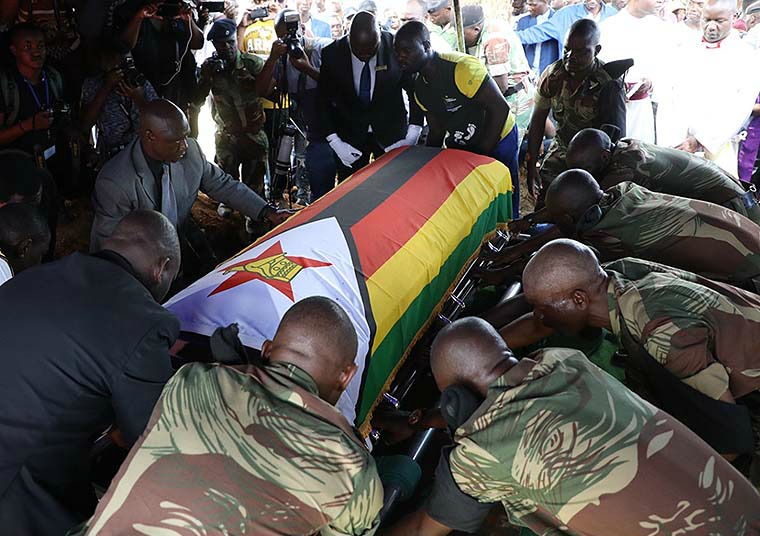 THE conferment of the National Hero Status has more often than not caused sparks to fly in Zimbabwe’s deeply polarised communities. The divisive multi-million dollar question has always been, Who deserves to be interred at the National Shrine?

Across the country’s funeral sector, a different debate is causing emotions to run high as undertakers haggle among themselves as to who amongst them should bury those bestowed with the National Hero or Heroine Status.

All along, only one funeral parlour has had the singular honour and privilege of handling such high-profile burials through a lopsided and opaque arrangement that has riled competition. Governments ordinarily do not work on loose arrangements between a service provider and officials of government ministries; they work on contracts with clear terms and provisions which industry players abide by.

This mandate includes the acquisition, preservation and provision of access to national heritage sites of which the National Heroes Acre, which lies on the expansive 57-acre (230,000 m2) site situated on a ridge seven kilometres from Harare, towards Norton, is one of them.

It’s a broad mandate that gives the Ministry the responsibility of leading the burial rites and approving payments to service providers, among them funeral directors.

In terms of Section 5 of the Competition Act [Chapter 14:28], the CTC should encourage and promote competition in all sectors of the economy and reduce barriers to entry into any industry or into any form of economic activity.

The Commission has powers to investigate, discourage and prevent restrictive practices and studying trends towards increased economic concentration, with a view to probing monopoly situations and the prevention of such situations, where they are contrary to the public interest.

Chapter 14:28 of the Act, defines restrictive business practices as anti-competitive agreements, and other concerted action, and unilateral conduct of an abusive nature.

In that regard, a restrictive practice goes against the public interest if it is engaged in by an institution with substantial market control over the commodity or service to which the practice relates.

Prohibited restrictive practices are of both exclusionary and exploitative nature, and include;

On the last three points, the Ministry of Home Affairs could be found wanting.

First, its relationship with its preferred funeral parlour doesn’t seem to be predicated on a written or verbal contract but a loose arrangement that can be challenged at law. In all fairness, the far reaching changes that have taken place in the funeral industry since 1980 when the Ministry of Home Affairs was still under revered Father Zimbabwe, Joshua Nkomo (now late), cry out for an overhaul of such an arrangement to resonate with President Emmerson Mnangagwa’s “Zimbabwe is open for business” mantra.

For over a century, Doves – founded by David John Morgan in 1902 before the business changed hands to the Hammer-Nel family – enjoyed a near monopolistic status in the funeral sector which ended during the decade that preceded Zimbabwe’s independence from Britain in 1980 when new players started eating into its share of the market. In 2000, Doves changed hands once again with economist Newton Madzika taking it over before he also let go of the asset in 2009 to the current owners.

Despite the changes in ownership, Doves has kept the loose arrangement going.

One may as well argue that the Ministry of Home Affairs was within its rights to allow Doves to perform the role of funeral director during burials for all national heroes because it was the dominant force in the industry when the National Heroes Acre was constructed in 1981. But considering the changes that the industry has gone through since then, that argument can no longer be sustained.

Crucially, the funeral director is no longer the dominant force that it used to be. According to the Insurance and Pensions Commission, it now trails Nyaradzo and Moonlight in terms of its market share. That alone is emboldening its rivals to press for a fair system that recognises competency, capacity and pricing through competitive bidding, instead of unilateralism which takes away the right to choose from families of our departed heroes and heroines.

Secondly, a free market system should be able to avail equal opportunities for all through competitive bidding, which removes the potential for corruption and other vices.

Thirdly, government should also not be seen to be favouring one private player over the other. At any rate, the responsibility of burying men and women who distinguished themselves in various endeavours should be given to the best in the field in an open and transparent manner, consistent with the country’s laws.

According to the National Heroes Act, the designation of heroes is done by the President, who has already pronounced himself on this matter.

During the funeral of the late music superstar Oliver Mtukudzi, President Mnangagwa declared that his government respects the choices made by families of heroes and heroines, including their preferred place of burial.

It was for this reason that Moonlight had an opportunity to bury Professor Phineas Makhurane in December last year in line with his wishes to be buried at his rural home in Gwanda. And in January this year, Nyaradzo conducted music superstar Oliver “Tuku” Mtukudzi’s burial rites.

The death of former president Robert Mugabe on September 6, 2019, however, proved the Ministry of Home Affairs is still far from adhering to President Mnangagwa’s call after it vetoed the former first family’s request to have Nyaradzo conduct Mugabe’s funeral amid indications that conflicted members of the civil service dug their heels in.

Mugabe’s funeral was more than a funeral; it was an event that required an event manager with skills that are beyond the scope of your ordinary undertaker-oriented organisation.

Given the clear bias towards one player in the industry, it remains to be seen if the CTC will find it prudent to exercise its mandate to investigate the goings-on in the industry for the benefit of all.

Nathan Chikara is an economist with a South African-based

insurance rm. He writes here in his personal capacity. For

Nathan Chikara is an economist with a South African-based insurance firm. He writes here in his personal capacity. For feedback, e-mail to nathan.chikara@yahoo.com