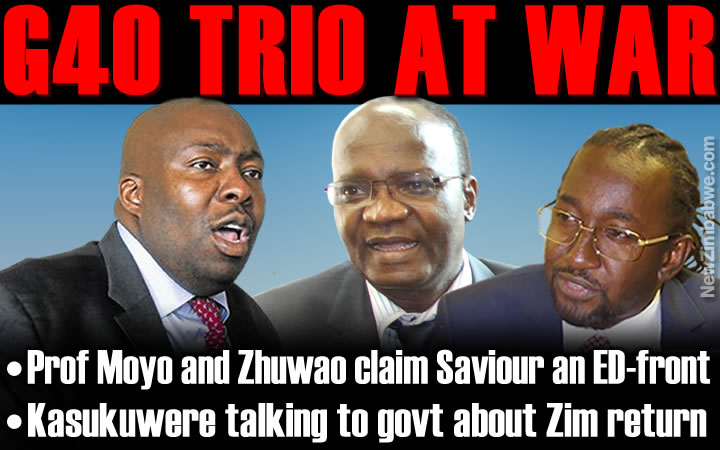 THE National Patriotic Front (NPF) could be headed for an early split amid claims by ex-cabinet minister Patrick Zhuwao that close ally Saviour Kasukuwere has been hired by the enemy to fan divisions within the Zanu PF offshoot.

Zhuwao was backed by the Professor Jonathan Moyo, the other part of the G40 triumvirate which is now in exile after being scattered by the ouster of its leader, former President Robert Mugabe last November.

The row comes on the back of a recent social media spat between NPF spokesman Jealousy Mawarire and former higher education minister Prof Moyo.

Mawerire hit back, accusing Moyo of being an “anti-freedom of speech zealot”.

Endorsed by ousted President Robert Mugabe, NPF is the brainchild of G40 kingpins in ex-cabinet ministers Moyo, Zhuwao and Kasukuwere who all fled into exile when the country’s military staged a coup last November, forcing Mugabe to surrender his job.

The embattled trio had all seemed cosy with each other until Zhuwao made sensational claims Monday the former Zanu PF political commissar had jumped into bed with the enemy.

Writing in his weekly column, Zhuwao – nephew to Mugabe – said there was an elaborate plan to foment divisions within NPF by President Emmerson Mnangagwa’s regime through sponsoring Kasukuwere into forming the “copy-cat” Zimbabwe National Patriotic Front (ZNPF) he described as a “junta project”.

“The reports indicate that this copy-cat ZNPF junta project will seek to hijack the membership of the real NPF and subsume them under the leadership of Saviour Kasukuwere,” Zhuwao said.

Zhuwao distanced himself from what he described as “political shenanigans and manoeuvring” by Kasukuwere adding that the former state agent was least of those suited to head NPF.

He accused the former Mount Darwin MP of going against earlier decisions by the three to stay clear of the fledgling party’s leadership functions.

He added: “Kasukuwere’s interactions with the military junta at its highest levels have also made it inconceivable for him to play a significant role in the real NPF, let alone lead it, since the real NPF was established to dismantle the junta,” he said.

“Kasukuwere’s dogged determination to return to a Zimbabwe that is under the yoke of the military junta has also left me questioning his motives.

“The only way in which someone walks into a dangerously fatally situation is if they have been given assurances for their safety.

“Given the threat that the real NPF poses to the military junta, it is conceivable that such a guarantee can only have been secured by way of a commitment to derail the real NPF.

“This is why I am taking seriously the reports of a copy-cat ZNPF under the leadership of Kasukuwere as a junta project to derail the real NPF.”

Zhuwao said NPF was formed, partly, to provide a “political home for those orphaned by the military takeover of Zanu PF and not as a means for the self–aggrandisement of those with unbridled political ambitions”.

Kasukuwere could not be reached for his comments on the accusations.

But the apparent fall-out among Mugabe’s most ardent G40 backers is a new episode into Zanu PF’s riveting leadership feud.

Of the three, Kasukuwere has kept a curious silence over his hounding out of the country during tense November events.

However, close sources to him say the former Mount Darwin MP has strategically elected not to follow his allies in rubbishing the Mnangagwa government for fear of further jeopardising prospects of an incident-free return to Zimbabwe where he owns a vast business empire.

A member of the ruling party from childhood and former intelligence officer, Kasukuwere is understood to have taken relaxed view of his expulsion from Zanu PF, reckoning that “ups and downs are nothing new in the ruling party”.

In his view, sources close to the former local government minister said, “you get expelled from Zanu PF, keep your counsel, and after five years you can apply to re-join the party”.

If this☝?Farai story is true, subject to confirmation given the Junta agenda to derail #NPF via a G40 kingpin, it would be paradigm-making & would confine #ZanuPF in the garbage of history!https://t.co/sfGNdrw5e4 via @thestandardzim pic.twitter.com/cYbmAi4doB

It’s false, illegal & unacceptable to say Mnangagwa & Chiwenga are foreigners. They were born in Zimbabwe & contributed immensely to the country’s liberation. A name isn’t a nationality. Besides, it’s not a crime to be a foreigner. People are judged by their deeds, not parentage! pic.twitter.com/hYdtR74dZN

In any election, the origins of contestants is questioned to establish their committment to their country. Obama’s origins was questioned so was Trump’s. There is nothing illegal about that unless one is an anti-freedom of speech zealot. https://t.co/gKgIC1wiMn