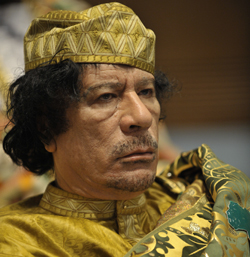 THIS week marks the two-year anniversary of the Western-backed assassination of one of Africa’s greatest leaders: Libya’s former president, Muammar Gaddafi.
His crime was Gaddafism: an ideology advocating for a strong, united Africa, which prioritized the interests of the indigenous masses over those of the foreign corporate bourgeoisie.
Gaddafi inherited one of the poorest nations in Africa; however, by the time he was assassinated, Gaddafism had turned Libya into Africa’s most prosperous nation. Libya had the highest GDP per capita and highest life expectancy in Africa. Less people lived below the poverty line than in the Netherlands.
After NATO’s intervention in 2011, Libya’s economy is now in shambles. As the government’s control slips through their fingers and into to the militia fighters’ hands, oil production has all but stopped.
The fall of Gaddafi’s administration has precipitated all of the country’s worst-case scenarios: the rise of Islamists’ to power, tribal massacres, genocide of black Libyans, an economy on the verge of collapse, and the concentration of oil profits in the hands of corrupt, well-connected elites.
A central pillar of Gaddafism was the equal distribution of wealth and oil profits. Prior to the colonel, King Idris let Standard Oil essentially write Libya’s petroleum laws. Gaddafi silenced these corrupt, foreign voices. The redistribution of oil money meant that these profits were deposited directly into every Libyan citizen’s bank account.
Nowadays, the new NATO backed regime in Libya has granted Exxon Mobil and British Petroleum hefty oil concessions. Unsurprisingly, neither company appears inclined to continue dishing out money to every Libyan. History, once again, circles back around to favour foreign corporations over citizens.
Libya’s oil output has plummeted from 1.4 million barrels per day, a matter of months ago, to only 160,000 barrels per day.
As the new government continues to lose control of large parts of the country, black market oil sales are skyrocketing. Libya’s Prime Minister has even threatened to “bomb from the air and the sea” any oil tanker trying to pick up black market oil.
For over 40 years, Gaddafism promoted economic democracy and used the nationalized oil wealth to sustain progressive social welfare programs for all Libyans. Under Gaddafi’s rule, Libyans enjoyed not only free health-care and free education, but also free electricity and interest-free loans.Advertisement

The International Monetary Fund (IMF) is currently shredding Gaddafi’s progressive social safety nets. The IMF team, which helped the Libyan Finance Ministry craft its annual budget, has raised a “red flag” surrounding these programs. The IMF called these programs “unsustainable pervasive discretionary subsidies”. Again, we see history circling around to secure Western power, while weakening the local populace.
Another pillar of Gaddafism was the championing of women’s rights. Unlike many other Arab nations, women in Libya had the right to education, hold jobs, divorce, hold property and have an income. The United Nations Human Rights Council praised Gaddafi for his promotion of women’s rights.
When the colonel seized power in 1969, few women went to university. Today, more than half of Libya’s university students are women. One of the first laws Gaddafi passed in 1970 was an equal pay for equal work law.
Nowadays, the new ‘democratic’ Libyan regime is clamping down on women’s rights. Immediately after Gaddafi’s fall, Libya’s new leader, Mustafa Abdul-Jalil, declared invalid all laws not conforming to Shariah, and vowed to end limits on polygamy.
With Gaddafi assassinated, the strongly patriarchal, tribal warlords and their militias have largely taken his place. The central government in Libya is weak and, under the present conditions, has little chance of controlling them. Islamist militiamen have grown more aggressive in unilaterally imposing their own strict rules on women.
Just recently, a renowned Libyan poet and University lecturer, Aicha Almagrabi, was stopped and beaten by militiamen. Her offence: being alone in a car with men without a male relative as a guardian. One can only imagine what countless other women are enduring in the new “democratic” Libya.
Despite Libya being a small nation, Gaddafi paid one quarter of the African Union’s bills. Now the African Union has been reduced to begging the European Union for funds to keep the lights on. By losing Gaddafi, Africa may also have lost Libya.
Africans, who supported the intervention in Libya, now have a similar look on their faces as the Arabs who supported the intervention in Iraq.
Perhaps, Gaddafi’s greatest crime, in the eyes of NATO, was his desire for a strong and United States of Africa. In fact, in August 2011, President Obama confiscated $30 billion from Libya’s Central Bank, which Gaddafi had earmarked for the establishment of the African IMF and African Central Bank.
Over the last decade, whilst China’s investment in Africa has risen ten-fold, America has used the United States Africa Command (AFRICOM) to establish 10 new military bases on the continent. While China invests in free trade, America tightens its military control. We should all agree that Africa does not need more guns and soldiers; however, the one thing America still forces upon Africa is more guns and soldiers.
Gaddafi stood as a major obstacle to Washington’s military expansion on the continent. Any African government that America offered money to host AFRICOM, Gaddafi would offer double that amount, in order to facilitate their refusal. In stark contrast, the new regime in Libya has recently expressed interest in hosting a new U.S. military base.
Of course for AFRICOM, it was a mission well accomplished. The objective was not to help the Libyan people, who had the highest standard of living in Africa, but to oust Gaddafi, install a Western-controlled central bank, and gain control of Libya’s natural resources.
Perhaps, the greatest legacy of Gaddafi’s life was the manner of his death. He did not look for a sacrificial lamb, but instead chose to be one himself. As Caesar Zvayi once remarked, “while Muammar Gaddafi may lie in an unmarked grave in the desert somewhere, he lives on in the hearts and minds of progressive Libyans and Africans”.
Garikai Chengu can be contacted at chengu@fas.harvard.edu