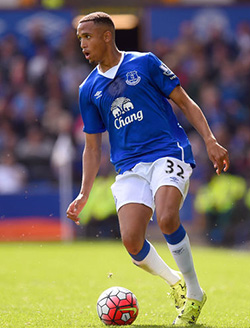 ZIMBABWEAN-born Everton defender Brendan Joel Zibusiso Galloway has signed a new contract that will keep him at the club until 2020 as his stock continues to rise in the English Premiership.
He has recently been called up to play for the England Under 21 national side.
The 19-year-old has made 18 appearances since his move to Goodison Park from MK Dons, in August 2014.
He made his Premier League debut in May and has kept his place at left-back this season following injuries to Leighton Baines and Bryan Oviedo.
Galloway, 19, made his debut in the 2-1 win on May 16 at West Ham and followed up with another appearance in the final game of the 2014/15 campaign against Tottenham Hotspur at Goodison and has retained his place at left-back through most of this season following injuries to Leighton Baines and Bryan Oviedo.
A delighted Galloway was pleased to put pen to paper on his new deal.
“I’m really happy to commit my future here,” he said.
“This is a club that has got so much young talent and is moving forward. It’s great to be able to commit to being a part of that.
“My family came up to watch me sign so it was nice to have them around. They have been with me all the way.”
Everton manager Roberto Martinez was delighted to be able to reward Galloway for his recent form.
“Brendan arrived at the Football Club with a very clear development path in front of him but the reality is that he has surpassed that.
“Then he joined the first team environment and he has developed into an important player and a very good performer. At Everton we will always reward those who deserve it.
“This is another step forward. He is still a young man but one with a fantastic personality.
“This is a day for him to celebrate with his family, but also one for everyone connected with Everton to recognise a young man who has come through and done so well.”Advertisement